With my new smoker I have experimenting quite a bit, as you may have noticed

I have tried several different cheeses and these are my results.

By far the best has been cheddar. I tried a cheaper one and it was ok but the temperature was a little too high and it lost some of its fat. This gave it a slightly processed texture.

The best cheddar I have used is a mature/vintage Pilgrim's Choice. I suspect any good mature vintage will do. It carries the smoky flavour well. I use 370gm packs and cut them in half to smoke.

Wensleydale was OK but nothing to write home about, the smoke seemed to be lost a little.

Stilton worked well but only for the outside of the cheese. The inside tasted just of the Stilton. Probable overpowered the smoke flavour. If I do this again I'll use thin slices so as to carry more smoke.

Barkham Blue. This is a superb local cheese. It took on a sort of bitter-sweet taste that I wasn't too happy about. I'll probably not bother with this again.

Spenwood.  (SPENcer's WOOD) Another good local cheese and is a hard-pressed cheese made from unpasteurised ewe’s milk. Not a great result being smoked.

I reckon that you need a good strong cheese to compliment the flavour of the smoke, but not compete with it.

It has to be the right texture to absorb the smoke.

I am not surprised but it is good to experiment as you may find something new! A good strong cheddar has a fantastic flavour.

Love smoked cheese...have you thought about making up little smoked hampers for pressies at any forthcoming presenty sort of event ...daren't mention the 'C' word yet

Love smoked cheese...have you thought about making up little smoked hampers for pressies at any forthcoming presenty sort of event ...daren't mention the 'C' word yet

What a lovely idea

I'll get me coat.

Dear me TA, have you had your specs checked lately

I'll get me coat.

Funny you should say that Janet, I had a reminder from my optician just the other day.  Fact.

Thought - if Squirrels are edible, why not Hamsters?

I'm sure hamsters are edible...if you're THAT hungry

Well Guinea Pig is a delicacy in South America... 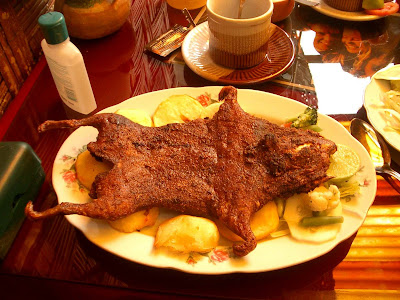 How did we get from smoked cheese to this

I have been sticking to Extra Mature/Vintage Pilgrim's Choice or Cathedral City with good results. I have also been smoking Wiltshire blue veined cheddar that I get from Devizes when I get there, which isn't often. These all give excellent results.

I have found a company on the internet that sells smoked cheddar so I bought a small piece to compare. I must say mine is far better. Theirs has  a slight processed texture and not a lot of smoke flavour (or even cheddar flavour). They are very cheap though so I guess you get what you pay for, including postage;

They package and post the same way I would, vacuum packed and in a jiffy bag. Considering postage will be either be £1.20 for large letter of £2.60 for 2nd class small packet this doesn't leave much for the cheese.

My cheese packs are 175gm which is half a £5 350 gm pack of cheese (not considering any offers the shop may have on). These are either vacuum packed and/or rustically presentation wrapped for gifts.. I reckon I can do these at the same price of my garlic at £6 posted.

With the new Post Office price banding I can post a pack with both a block of cheese and a 3 pack of garlic for the one postage cost, £10 seems to be a nice round figure. As Terrier hinted to above, I'll take orders for 'C' in November

I think this will be a perfect gift for a relative, who's a bit of a foodie and has a special occasion coming up next month.  A double block of the cheese would be better for him though (he'd eat the one block in one sitting

) along with the garlic.  And I like the sound of the rustic presentation gift wrapping.  Remind me how I get in touch with you, Simon? (seeing as the pm facility on here doesn't work