I manages to get 2 1lb punnets of plums for the extorsionate price of 20p each, somewhat under -ripe ones too.  Janet likes the plum skins left in, but I want to add crab apples to the mix. If i get the apples quartered stewed and dripped overnight through the muslin, can I then add the plums to the liquid and treat as normal?  or will the second cooking for the plums ruin the apple liquid?

Neil, is this for a jam or jelly?

What are you asking when you say 'will the plums ruin the apply liquid'?

If this is for a plum and crab apple jam, I would cook them both separately - and when the plums are cooked, add the apple juice, and measure accordingly for the amount of sugar required.

The crab apple jelly will also act as pectin, although I wouldn't have thought pectin would be a requirement with plums - but on the whole this sounds like it would set really well !

Good luck and let us know what you decided and the result.

Thanks for the quick reply brightspark, was having a senior moment,

i have the plums in cooking and the apples in the sink ready to wash. The apples I collected this time are quite large, yellow, and have a beautiful smell as well.

I am hooked on jams and jelliy making.

I am hooked on jams and jelliy making.

It is very satisfying.

It's also good to experiment - the quince & cranberry preserve I made this week was one of those.

The recipe asked for cranberries, but I'm not sure that the French use them like we do, and I haven't been able to find any, so having sufficient quinces which were about to go off, I needed to make something!

So I went around the garden and picked all the rosehips I could find, and used most of them as a juice (as you're doing with your crab apple), with some large ones, though, I cored because I wanted some 'red bits' in the conserve. That still wasn't sufficient, so I then chopped up a sweet red pepper, and added that.

See here for the recipe, if you're interested in trying it.

Thanks for the recipe, I will keep my eyes open for quince up here.

Now I do not have a single jar left, and Janet would like some apricot jam made.

Did you try the rosehip and crab apple jelly recipe on here?  Superb, full of subtle flavours and might even be different depending on the rosehips used.

Found a tree on my way home today covered in red, cherry sized fruit, stopped the car dived out, grabbed some, back in the car and out the road before some one came round the corner and smashed into me.  Turns out the are just very small apples. Thought I had found something different.

that looks delicious BS but the recipe says cranberries; did you use cranberries or just rosehips and the redpepper??; if so how many rosehips?

Shelley, I couldn't get hold of cranberries - at all.

My recipe had more quince than was required - in fact, I would say that the quantities I used for the quince & 'cranberry' were reversed, i.e. more quince.

So, that said, I had only about a pound of rosehips (not really enough, I know), which is why I added the red pepper - and, if I'd had more red peppers, I would have added those too.

Also because cranberries. I think, have pectin, that is why I added the juice of a lemon, even though the quince has plenty!!

The candied ginger was a revelation, too, Shelley - I found it in the oriental aisle cookery section in Auchan - and it was in two large lumps in a plastic see-through box totalling 200gms - just what was needed to make up the quantities in this preserve!

This was exceptionally good without the cranberries, but I would be very interested to know if the recipe is improved with them.

(Rosehips are fiddley, aren't they? I suppose cranberries would be too if you have to top'n'tail !)

I've never topped and tailed a cranberry in my life - and I've used a fair few in my time!  I love the little blighters.

Is that right? I have (to my shame) never actually used cranberries in my cooking - ever!

I assumed they had to be top and tailed. 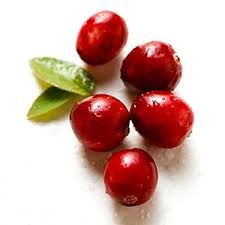 They look like that when you buy them.  No work at all.

They look like that when you buy them.  No work at all.

What a beautiful picture - to paint - wonderful colour (I could only see this if I put it into 'Quote' mode). I think I might have to cook this when we get back to the UK - but WITH cranberries!

Well; I managed to find dried cranberries at intermarche today; rather expensive, but I bought one kilo, plus 2.5 kilos of quince and 3 red peppers;

then I changed the recipe slightly

First I soaked the cranberries in the water to rehydrate them, then I sliced the quince and put them to one side; next I chopped the red peppers finely and 100g of ginger very finely.

then I cooked it all up until setting point was reached.  I have ended up with something that looks nothing like the pic on the site you had BS, but is totally delicious; a sort of jammy chutney without the vinegar!

I am totally certain the french will LOVE this as it is just the sort of thing that appeals to them; I just wish the cranberries were less expensive!