An infestation of mice

Posted by Fiona Nevile in Discoveries, Pests and Diseases | 26 comments 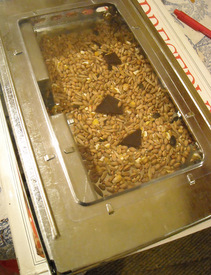 We have mice in the chicken run, mice in the garden, mice in the larder, the kitchen, the bedrooms. In fact there are mice everywhere. Looking ultra cute and messing up our cottage big time. Something had to be done. I tackled the larder first. Trapped one within minutes and no more came. Just one mouse had created havoc in there.

QD had a great deal on Tala Le Parfait style jars so I invested in loads of them. Now nothing in our larder is contained in a box or a bag. It looks pretty too.

“Catching mice is easy peasy.” I thought as I set the trap beside the toaster. A mouse – possibly not the same one – had been spotted there several times.

Well those mice have clearly come from a home with lots of sharing of ideas. They shun The Deadly Traps and continue to torment me with pounding behind the cooker. How can things that small make so much noise?

So yesterday I bought a humane mouse trap – this can catch multiple mice. It’s aluminium so can be used in the kitchen garden when my pea seedlings come up. Perhaps the mice in the kitchen wouldn’t realise that this is a prison? I baited it with chocolate, cake, salami and went to bed. This morning the trap was empty. I hate intelligent mice!
Then I ventured onto the internet to read the reviews about my The Big Cheese – Multi Mouse Trap. My heart sunk when I saw the star ratings for this device – just 2.5 stars. I settled down with the Min Pins to read all the reviews. The one star reviewers had used the ‘normal’ sure fire success baits, similar to mine. But the five star reviewers had used wild bird seed and raved about the traps.

I trundled down to our grain store and spread some wild bird seed in the trap. Within an hour we had caught one mouse. Relocated swiftly over half a mile away. Danny and I went out foraging for wild greengages this afternoon. When we returned there was another teeny mouse in the trap.

As I drove down the village to find a suitable release point I pondered on my situation. I’m now a taxi driver for mice that need to be relocated. Fine as long as they don’t return! We are leaving the trap in the kitchen until we stop catching mice, then we’ll move the trap on. Next move will be upstairs. This Big Cheese trap gets the thumbs up from me in fact I’ve ordered two more. They are cheaper on Amazon and having signed up for Amazon Prime, I don’t have to pay postage and get next day delivery. Mice ate so much of our produce this year – soft fruit, pea shoots and larder stores. From now on hopefully it will be a different story. I do feel better using these aluminium humane mouse traps than the killer traps. The mice are released well away from houses in woodland areas and when I open the lid they happily scamper away to enjoy total freedom and a brand new adventure.