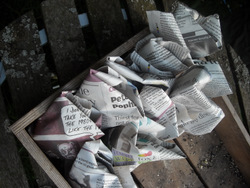 Danny has been frantically busy for weeks now. So he swapped cooking for seven nights running (simple quick food) if I finished off his potato border and planted the spuds.

As you know I’ve started practicing biodynamic principles in the garden this year. I’m hoping for an increased harvest and a healthier garden all round. I read what John Soper had to say about potatoes in his book Bio-dynamic Gardening –

lots of good advice but he didn’t give spacings. So I consulted my gardening bible Joy Larkom’s Grow Your Own Vegetables

. Sho suggests that maincrop spuds should be planted 38cm/15” apart in rows 75cm/30” apart. Our farming friend suggested planting our seed potatoes 12” apart when we collected them.

I decided to experiment and use two methods and much tighter spacing. The first method is similar to the ridges that Danny used last year. Two double ridges – placing the seed potatoes 12” apart in staggered rows in a ridge 25” wide and set 15” apart. The effect of staggering gives each plant a bit more room and I tend to do this if I’m planting more closely than convention suggests.

The second method I found here and it is ingenious. The spuds are planted between two ridges which helps divert water to the spuds in the ‘valley’ and also allows for the growth of catch crops along the ridges. These crops will have been harvested long before the need to earth up. However I allowed just 12” between each spud and 15” in between the base of each ridge. I staggered the potatoes in the valley rows too. If all goes well we will have 60 potato plants in the border.

We decided to test out Kate’s advice and wrap the seed potatoes in newspaper before planting. Apparently this is a good way of discouraging eelworm. This was a bit of a palaver but worth the effort if it stops the miniscule blighters from munching our crop. Following Joanna’s advice I have grown loads of French marigolds to edge the border as these are supposed to repel eelworm.

I can’t wait to see how our spuds turn out this year and compare the two methods.