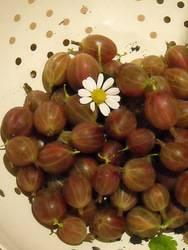 It was Gilbert who introduced me to gooseberry gin. He produced a battered old hip flask out of a hidden pocket in his fatigues. We were foraging for wild cherry plums and were resting on a mossy bank. Gilbert opened the stopper with a flourish.
“I bet that you haven’t tasted this delicacy before.”
One sip and I was hooked and eager to make my own. I even had an old inherited hip flask knocking about the cottage somewhere.

This particular brew was made from red dessert gooseberries. These berries are far less tart than the green ones and can be guzzled raw. Consequently red gooseberry liqueur calls for less sugar in the mix. In the recipe below I give sugar quantities for both red and green gooseberries. As you can see from the photo I prefer to pick my dessert gooseberries when they are still not quite ripe. In a couple of weeks time I’ll make a sweeter ripe red version.

When I first tasted Gilbert’s grog we just had one green gooseberry bush in the garden. A nameless variety that I’d swapped with an old gardener in the village for a few jars of chutney. It’s easy to miss an occasional berry and this one bush has self seeded – the progeny are two hefty children and just this year I spotted a new baby.

Since our foraging outing was in Autumn, the gooseberry picking season was over, I immediately invested in two Hinnonmaki Red gooseberry plants from Homebase. These are reasonably priced slim line bushes that are sold in oblong boxes and need a few years to establish themselves well. If you are impatient for a more mature gooseberry bush there loads available online but to be quite honest we’ve had great results from the Homebase ones. It’s worth taking a peek in the boxes and choosing the ones that have the best, sturdy growth.

Back to Gilbert’s gooseberry gin. This is superb and well worth making even if you have to buy the gooseberries. It can be drunk neat, ideally poured over ice. The grog makes a good long drink topped up with fizzy water. Gooseberry gin is perfect poured over ice cream. Of course gin soaked gooseberries can be added to a fool, crumble or pie. One year I froze the gin infused fruit and made a scrummy sauce to accompany the Christmas goose.