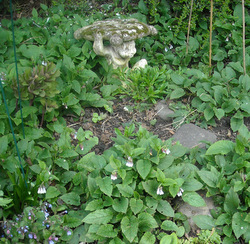 A few years I wrote about rocambole and a few weeks later I discovered that it was actually growing in my garden. A colleague in London had given it to me on a plant swap and described it as
“White bells that smell of garlic. Weird!”

I felt such a fool.

I’ve had a longing to grow comfrey in my garden as it appears to be such a useful plant. The leaves can be made into a fertilising tea – high in potash, nitrogen and loads of other trace elements that the exuberant roots find deep down in the soil. This tea is a wonderful free fertiliser for fruit bushes, flowers, tomatoes and peppers.  Potatoes love comfrey tree too. The leaves can also be used as a mulch. Growmore eat your heart out.

Comfrey relishes a shady spot so would be perfect for the north borders of the garden. I bought a plant a couple of years ago but it fizzled out I stupidly planted it in the wrong place. It hates sun and I hadn’t done my research. So this year I ordered comfrey seeds from the new Otter Farm Shop and hopefully they will be germinating in the Solar Tunnel as my fingers fly across the keyboard.

I’ve just checked and the seeds haven’t germinated yet. They were rock hard so perhaps a warm water soak might be the answer?

A couple of days ago I went up to have a cup of tea at The Chicken Lady’s and look at their superb garden. Surrounded by a lot of trees it’s a difficult patch but both TCL and S have worked wonders. It’s lovely – even now it’s bursting with life. Further up the hill than us, the fruit trees are already in blossom. The earth is different to – good loam, slightly sandier than ours and not all our stones. I must admit that I was a bit envious.

TCL had invested in one of those wonderful dustbin incinerators. I’ve had one for 20 years and finally the bottom fell out of mine last year. But theirs was shiny and new and it didn’t cost much more than the price I paid all those years ago. As she fed the beast we were chatting.
“Nothing much grows on this bank. Just this bit of comfrey and a few other things.”
My ears immediately clicked into intensive listening mode. Comfrey – I need to grow this and use this on our plot. I looked at the comfrey and secretly thought, “That’s not comfrey. It’s pulmonaria.”

Later after tea (not comfrey), S pointed out another large patch of ‘comfrey’.
“But surely that’s pulmonaria. We have loads of that, I’m constantly pulling it out. We have a spotted version too. I love the spotty one – white, pink and blue flowers on the same plant. Magic.”

They tactfully led me to a patch of pulmonaria.
“It is different. Now I look closer.”
It was completely different. But I had assumed it was the same. Assumptions are so often a rocky road of destruction for me.

But I didn’t feel foolish this time. I was elated – we are growing comfrey already. OK its creeping comfrey not the 3’-4’ kind but I hoped that it will do the same job. I pulled all the plants that I’d dug up yesterday out of the compost heap and put them in a large airtight container with some water.

I finally discovered that my low growing comfrey is not the type recommended for homegrown fertiliser. This is called Symphytum x uplandicum or if you want to get onto first name terms – Bocking 14. It is generally sold as root cuttings and is so high in nutrients that it’s also used as an animal feed in Africa and other parts of the world.

To make comfrey tea. Find a bucket with an airtight lid, with comfrey leaves. Cover with water and mature for 4-5 weeks and then be diluted 1:15. Potent stuff. Apparently this mix does small BAD – like sewage apparently. So if your nose buds are sensitive, help is at hand as I found this excellent video. How to make fresh comfrey tea using your liquidiser (don’t tell Danny – he’d never eat soup again).

Meanwhile I’m looking for Bocking 14 roots and think that I’ve found them in Anglesea.