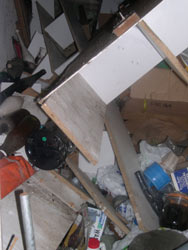 “This bread looks mouldy. Or is it just dusted with flour?”
Danny held the slice under the light.
“It’s definitely mould.”

We had some sliced bread in the barn freezer so I pulled on my wellies and went out.

I knew that something was wrong when I tried to open the door. There was a scraping sound of glass on concrete. The way to the freezer was barred.

I shot back to the kitchen.
“Danny, come quickly. The shelving unit has collapsed. Most of the demi johns were on the top shelf. My dark brown one is smashed. It contained our best wine, the ultra-gluggable blackberry.”
We’d waited three years for this to mature.

The sturdy 12′ x 6′ shelves had been built for me in the late seventies by my boyfriend. He had used enough screws to hold up the Menai Bridge. The shelves have moved with me since then. The cottage was too small to accommodate them so John Coe rootled in his boot for a screwdriver and put them up in the barn. They were never as they had been.
“There’s no need to use all these screws,” he assured me, as he set the shelves haphazardly on the wall. “I will screw the main body to the wall and secure the ends with wire.”

The unusual edifice has stood gallantly for sixteen years. The top and bottom shelves swapped around, the side supports standing at rakish angles. In its prime, it was a bookshelf to be proud of. In the barn it became the ultimate glory hole. Having left books far behind, it accommodated a vast range of things from paint cans to boxes marked ˜Special. Do not chuck.’

During its last few years it held the demijohns of home made wine and the fruit liqueurs.

Despite the loss, we could only laugh.

“What was the last thing that you put on the shelves?”
“I think that it was the three bottles of currant vodka that I made this week.”
These are almost as special as the blackberry wine. They were made with black, white and red currants from our garden. No chance of picking any more fruit until next summer.

At work I made a plan. The old shelves had to go. If one of us had been in the barn when they collapsed we could have been badly hurt. We needed to clear the barn of broken glass, take the smashed shelves to the dump and replace them with a row of smaller shelving units. These will be bolted to the walls.

Danny dragged the old shelves out of the barn as the dislodged bottles smashed around him. We sifted through the wreckage and found things that have been lost for years. Quite a few bottles of my aunt’s homemade wine miraculously survived. Luckily a lot of demi johns have been waiting patiently in the cottage to be transfered to bottles but the superb blackberry, greengage and rosehip wine is lying in a great wine and paint slick on the barn floor.

Supper was forgotten as I sifted through the glass and burst paint cans for evidence of the currant vodkas. Wonderful wafts of a sweet smelling solution wafted over me. A bottle of Comfort fabric conditioner that I’d put on the top shelf last night had smashed in the avalanche. Was this the final straw that broke the shelves’ back?

Finally hunger drew me back to the kitchen and I discovered that I had stashed the currant vodkas under a chair in the kitchen. Danny held them aloft like maracas and shook them. Beautiful berries and leaves floating in tinted vodka.