Posted by Fiona Nevile in Chutney and Pickles | 6 comments 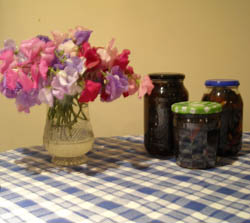 Although I left Magic Cochin’s house in January clutching the trophy silver pickle fork, they were just being kind. The Cochinery had produced wonderful pickled walnuts. The vintage 2005 were to die for and all smugness ceased as I divd into the 2008 Cochinery jar. My pickled walnuts didn’t even reach the starting stalls.

“So why have I been awarded the trophy fork?”

Admittedly this was our first year of making pickled walnuts but I reckoned that I was in with a chance. I‘d spent hours researching hundreds of pickled walnut recipes. I thought that I’d come up with a couple of real corkers. But when I read Magic Cochin’s review she mentioned that the best one (in my opinion) tasted medicinal and I had to agree with her.

Every time I dust the kitchen mantelpiece I find the elegant fork. The Cochinery gave me a nudge when it was the perfect time for harvesting walnuts this year. As I’m off the road at the moment, these walnuts have had an interesting entry to the world of pickles. Soaked for two weeks in brine (changed every three days) they dried slowly in our cool kitchen. They were finally introduced to a spiced vinegar solution this evening. Mainly because an old friend was dropping by who may have been alarmed by the oval blackened objects laid out on the ancient baking tray.

Each walnut was double tested for softness with the trophy fork and any tooth challenging ones rejected. I used HFW’s recipe with three extra ‘secret’ ingredients. Fresh ginger, mustard seed and a large dollop of hope.

One Saturday, in the middle of January 2010, the Cottage Smallholder will be hosting The Second Grand Pickled Walnuts Challenge. This is open to everyone who makes their own pickled walnuts. Applications in writing please to walnut2010@cottagesmallholder.com.

If you are planning to stay until midnight we also need a handwritten letter from your parents.