Posted by Fiona Nevile in Pheasant and Game | 21 comments 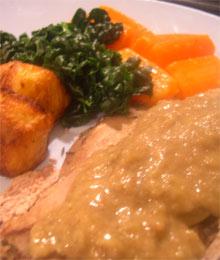 We’ve had a pretty good season game wise. I have quite a few clients who shoot and are generous with their bounty. I also offer a plucking and dressing service. The fee is a bird for each bird plucked. This guarantees a steady supply of game when I’m not working on a bountiful estate. The Min Pins always goggle when I step into the kitchen with a brace of pheasant slung over my shoulder. I can almost heard them thinking
“Finally, she has done a proper day’s work.”

In a mild winter I’ll hang the bird for three days in our cold larder to let the gamey flavours develop a bit. If it’s very frosty weather, they may need to hang for an extra day or two. Our larder is an old fashioned one, built with a cold chamber under the floor.

Generally I skin the birds for home consumption. This means I can prepare and dress a bird in ten minutes but the flip side is that the pheasant has to be pot roasted in a covered casserole. We have developed several pheasant recipes that work equally well with skinned and unskinned birds. The secret, as with any pot roast, is to provide a really moist environment within the casserole dish so the pheasant is slow cooked and semi steamed in an atmosphere imbibed with flavours.

Having laid out quite a bit of cash for 6 kilos of free range pork to develop our sausage recipe before Christmas, January is paying for this investment. We are not buying a Sunday joint but trawling through our freezers instead. We haven’t suffered in the least but I know that D is itching to get his hands on a decent joint in February. On Saturday I found a young hen pheasant in the freezer.
“We have this pheasant. Let’s pot roast it on Sunday.”
Danny’s face flickered briefly. I ignored the disappointment and covered up by saying that I didn’t fancy it either.

He planned to cook our gipsy style pot roast pheasant tonight. But we had run out of streaky bacon and the pheasant was a lean young hen pheasant with very little fat. I returned home as he was preparing the casserole.

“I think I’m going to add a tiny half star anise to the apple in the pheasant dish tonight.”
“Why don’t we add some honey too?”
Remembering the success of the sausages baked with onion and apple we finely chopped half an onion, scattered it onto the bread along with the thyme and apple and dripped on some honey. This just proves that two cooks working together can produce something far better than individual ‘inspiration’. My last new individual creation was removed by the dustbin men last Monday.

This dish smelt divine as it baked, filling the cottage with heady aromas. After the dustbin disaster I was on tenterhooks. But the first forkful tasted very good indeed. Better than our gypsy style recipe. We were stunned. Admittedly it was a very young hen pheasant but the dish was superb. The succulent carcass was picked quite clean. This would be a great, lazy dinner party dish. Just pop in the oven and prepare for rapturous applause. But do remember to ask for a hen pheasant at your butcher’s, if you are not given a hen pheasant or shoot one yourself. In fact you should ideally ask for a hen pheasant every time. Then you can almost guarantee a tender bird.

We ate this with small roast potatoes, Calvero Nero and sweet organic carrots. A delicious and surprising combination.