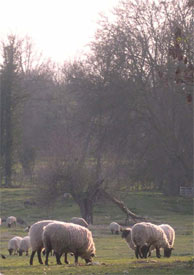 I tend not to buy lamb shanks as they usually look so weedy and unappetising. Last week I spotted a half price pack of two lamb shanks on the Tesco condemned food counter. These were quite chunky (just under a kilo) and the original price was pretty stout too.

They had been reduced from £7.95 to £3.50. So naturally they ended up in my trolley. I decided to try just using ingredients that were knocking about in the fridge and larder and devised this dish that would easily feed eight. The combination of carrots, tomatoes and red wine worked well with the lamb. The lentils and barley padded out the meat and added more texture to the dish. It’s really easy to make and tasted as though we’d slaved for hours balancing the soft flavours.

There is no need to fry the onions or the meat, so like so many slow cooker dishes, this recipe is low fat.

We planned to have one meal and freeze the rest in batches but we’ve ended up eating it three nights running. It definitely was best when left to chill completely overnight before reheating the next day.

It was great with herb infused bulgar wheat and a salad of fresh leaves from the garden.  It was also lovely with John Coe’s broad beans and buttery new potatoes.