The role of Beekeeper’s Assistant is now a permanent position 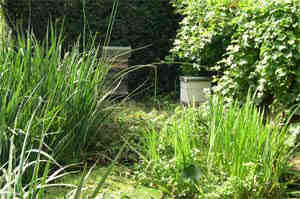 Photo of our little apiary with two hives

When Danny asked for a pair of beekeeping gloves and a hive tool for his birthday, I realised that he was finally hooked. He’d been very keen for me to keep bees but assured me that he would not be involved in anything except eating the honey.

That was fine with me, I was happy to attend the courses of the Cambridgeshire Beekeepers Association. The empty hive looked great beside the pond and it looked even better when the new colony was installed and bees were drifting in and out.

It was only when I bought home the nucleus colony that I began to feel nervous and very alone! I had attended several practical sessions at the Wandlebury Apiary but having total responsibility for a hive seemed a giant and scary leap.

There is quite a bit of hefty lifting involved in beekeeping. Poor Danny made the mistake of saying that if he had a suit he could help. I telephoned the bee suit supplier at once and within a week Danny had been promoted from honey taster to Assistant Beekeeper. We decided that for the time being he would wear marigold washing up gloves to protect his hands (many beekeepers use these). But I had noticed him eying my leather gloves enviously.

Bees are gentle creatures. Generally they just get annoyed when you get in their way. They don’t like having their roof taken off and their frames examined. As the summer progressed their numbers increased. There are probably about 70,000 bees in the colony at the moment. So each time we approach the hive it is with trepidation.

Danny is responsible for the smoker. Fire and smoke – a boy’s toy! This is the main method of calming the bees when we are examining the hive. When he stands beside me, smoker puffing in his hand, I feel so much more confident. I now realise that I need his calming influence. Hopefully the leather gloves are the first step on the road to Master Beekeeper.