Update on Baby: tackling bullying in our flock of chickens 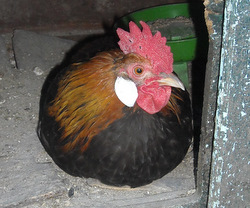 Baby our diminutive cockerel is still very small. He has a sweet nature but his brain seems to match his size. The only time that I’ve seen him trying to take a dust bath was on a rainy day – no wonder he looks very tatty compared to the rest of the flock.
This tattyness set off alarm bells with me. Why wasn’t he grooming like the other chickens? Was he depressed? The swing seat is within earshot of the chicken run. Tempers can flare in the flock and this is to be expected every now and then. Baby is not even on the first rung of the pecking order. At rock bottom, he’s a punch bag. I can hear his screams when he’s attacked and come running. The naughty perpetrators dissolve into nothing when they see me approaching. I am Head Chicken after all.

These attacks on Baby don’t happen constantly – maybe twice a day. I noticed that he didn’t feed and drink unless I was in the run or after he assumes that the rest of the flock have gone to bed. This is when the tormenting began in earnest, Baby would peek out of the Emerald Castle to see if the coast was clear and then make his way to the grain store in the main chicken house. Waiting in the shadows would be the evil elderly ginger hen who would be poised until he took his first bite and then jump on him. Poor Baby rushed immediately back to his home with a shriek. And this evil hen would lurk for hours.

I’ve had words with this hen to no avail. She is seven and no longer laying. We are paying for her keep and receive no eggs in return. She stares away like a child ticked off and tosses her crest when she thinks that I’m not looking. She knows that I’m too soft to kill her. But recently I’ve wanted to bite her head off. Literally.

To scotch the wicked ginger hen I gave Baby his own water fountain and feeder. But of course the entire flock preferred this new restaurant in the Emerald Castle They ate all his food and knocked over his water fountain within hours. Who wants to eat in the same café every day? Even chickens get bored.

Three days ago I saw Baby being attacked by the Wicked Ginger Hen – a mugging in broad daylight. She pursued him into the castle. I threw down my trowel and stalked across the kitchen garden and opened the gate to the run. Removed the wicked ginger hen – I just have to order her out. As she slunk away I noticed that Baby was bleeding.

Not a mortal wound but lots of little cuts on his head and legs. I soothed him, bathed the cuts and put him gently back into the Castle. Recently I’ve seen solitary chickens living happily in arks at The Chicken Lady’s house so I decided to try that route. The door of the Emerald Castle clanged shut. I had been loathe to do this as I wanted him to have more freedom of movement. But if this means that he’s attacked every day what sort of liberty is that?

Within hours I noticed him sitting in the Castle grounds watching the other chickens in the run. Then he started grooming. Finally Baby has his own little kingdom where he feels safe. I wish that I’d had the sense to do this months ago.