And the culprit eating my pea shoots was…

Posted by Fiona Nevile in Pests and Diseases | 19 comments 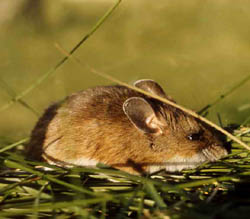 I’ve been busy tackling the mystery of what was eating my pea shoots. These peas were planted in October under fleece. They germinated well and were at the stage where they needed to be supported by twigs. At first I suspected slugs. My open beer traps didn’t attract a single slug. Then Cath gave me the tip that traps need to be covered and I remembered that years ago my mum gave me the ultimate in slug traps. I found it in the greenhouse and set it up with a trill. But even the mighty Slug X beer fest didn’t attract a single  mollusc reveller.

Also there are a lot of tasty pak choi and lettuce seedlings under cloches and these haven’t been touched.

Meanwhile Jo from Little Ffarm Dairy suggested mice. I thought mice were only a danger at the seed sowing stage. Even though my patch of peas is just a few feet away from a mouse hotel – I’ve seen them playing when the Min Pins are indoors – the seeds didn’t appear to attract mice before they germinated.

Feeling a bit of a pig, I set two traps in the giant cloche – perhaps mice like their five a day too? Yesterday morning the cheese had been gently eased off one trap.
“Ah ha!” I thought. “It’s just a matter of time until I catch my suspects.”
This morning I found a dead mouse in the other trap. So mice like eating pea shoots. I wonder if they ate the carrot seed?

I have set both traps again. Although the dead mouse was very plump it couldn’t have eaten so many shoots on its own. So I’m expecting more visitors who would welcome a little cheese with their pea shoots.