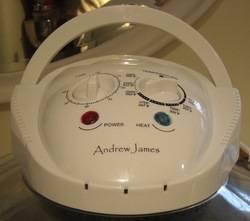 The top of the lid of our Andrew James halogen oven

I want to introduce you to Andrew. He is our new kitchen assistant. When he arrived he was given the night off but in the morning was up early to cook a perfect full English breakfast. It took the same time to cook as using the conventional oven but instead of using two hob rings, the grill and the fan oven Andrew took care of the sausages, hash browns, tomatoes, mushrooms and bacon. Leaving me to make the fried eggs and work out how much electricity we were saving.

Andrew is quite chunky. With his 12 litre bowl he takes up a fair amount of worktop space. The one drawback is the instruction manual. I thought that Andrew was wearing a natty stainless steel belt until I realised that it was an extension ring that gives him an extra five litres capacity. Apart from the skewers the rest of the accessories had me flummoxed. A trip to the Coopers site revealed all. The 36 recipes are not great either as they are poorly translated and inconsistent. You can download a free recipe book from the Internet. I also invested in the The Halogen Oven Cookbook

by Paul Jones and Leah Meads. This has tips on how to use your halogen oven. Handy for a halogen oven virgin.

On Sunday Andrew roasted a crown of duck and lots of potatoes. He was still wearing his extension ring as a belt so I had a bit of a problem fitting everything in. Again it took the same time as a conventional oven with the exception of the preheating time which is about 25% less in Andrew. Browsing other halogen oven manuals on the Internet I discovered that I was using much lower temperatures than a lot recommend. So I need to experiment with this. It’s easy to see how your food is cooking through the glass bowl rather than opening the oven door –  this saves on electricity too.

The accessories – once you know how to use them – are handy too. A lid stand is a must as the lid does get very hot and might damage a work surface. Apart from the extension ring they can all be stored in Andrew’s bowl when not in use. The one drawback is that if you are not going to cook directly in the bowl you need round dishes for things like pies and casseroles. Luckily I inherited several from my aunt and now they are really coming into their own. The 12 litre glass bowl is quite heavy too so I wouldn’t recommend it for people who are not reasonably strong.

Although the instruction manual is poor, the Andrew James premium halogen oven cooker

gets the thumbs up from me. He is easy to use and can even clean himself. He can defrost, roast, grill and bake. He can even cook boiled eggs. He has a built in timer and settings in Centigrade and Fahrenheit. He is far more economical to run than a conventional cooker and above all he’s fun to use.