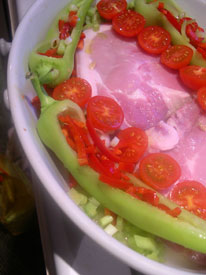 “I’ve always been suspicious of those.”
I was reaching for some Romano peppers. Curious, I glanced round. The lady beside me was smiling. No one ever talks to me in the supermarket, apart from the staff at the checkout.

In an elongated split second I twigged that she was probably chatty, not mad.
“Are they very hot?” She queried.
“No, they have delicate flavour. Light years beyond the bell pepper.”
We talked for a few minutes.

Her daughter had flung a pork chop into the garden at seventeen and declared, “I am now a vegetarian.”
Overnight the entire family had switched from being carnivores to vegetarians. I was fascinated. It’s a battle to get Danny to eat a vegetarian meal and not find him grilling a steak at two in the morning.

“Was this change difficult?”

“My husband is the son of butcher, third generation.”
“And he gave up eating meat?” I was intrigued.
Her response was quiet and confidential. “Sometimes, he goes out and buys himself meat. As a treat. Generally at weekends.”

“You should definitely try these Romano peppers, and also these small green Marmara peppers. They are delicious in salads.”

She nodded but didn’t reach for the packs. Bell peppers are fine but Romano and Marmara peppers are the sort of deilacte peppers that make me want to eat vegetables by the shovelful.

This afternoon, knowing that it was my turn to cook (pork chops) I let my mind drift over what was in the fridge. Salad onions, tiny sweet tomatoes and the peppers. I like salad and slow baked food, it gives me time to get out in the garden for a while. I decided to cook these special peppers. Great summer flavours combined well with the density of the pork. Very easy and delicious. They would make great tapas. Gentle when fresh, the cooking enhances their flavour.