How I learned to cook (part one) 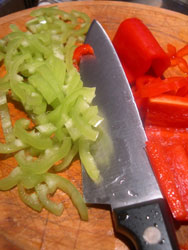 The three lines in the small ad read, “Small Chelsea flat in return for light domestic duties and care of elderly Peke.” I grabbed the telephone and within 30 minutes was ringing the doorbell.

The flat was pretty. The Pekingese was called Fanny and over a formal cup of tea, the domestic duties were explained. They wanted a cook. My heart sank.
“You can cook?” The smart lady in her sixties observed me over expensive horn rimmed spectacles.
“Of course,” meeting the gimlet eye. I was 22 but had never cooked more than a baked egg. So what? I had a week to learn and I wanted the flat. Cooking had to be easy – even my mum could do it.

I rushed back to my sister’s flat on a wave of euphoria. I had my own pad, in Chelsea. The days flew by. There just wasn’t time to learn how to cook.

A week later, I was lifting my suitcase out of the taxi. Foolishly, I hadn’t even invested in a cookbook. The couple were in a fever of anticipation:
“We’ve invited some old friends to dinner. It’s just roast chicken and vegetables. We didn’t want to impose too much on your first night. We’d like to eat at eight. We expect you to join us, of course.”

The last comment threw me far more than the prospect of cooking the meal.
“What would I wear? What would I say?”

At 6.30 I climbed the stairs to the galley kitchen and made a plan. I would cook everything for one hour. Then I was bound to get something right.

Peeling the potatoes and carrots, I reckoned that they were the same sort of density so could be boiled together in the ancient aluminium saucepan I had found under the sink. The husband, a kind arty man who wore round dark glasses and a gold earring, nodded and smiled each time he passed the door. Trying to look like an experienced cook I chopped some cabbage slowly with a bread knife. On the dot of seven I switched on the gas oven, bunged the chicken into a baking tray, put the vegetables on to boil and went down to my flat to titivate.

Half an hour later the potatoes and carrots looked a bit mushy so I popped a lid on the saucepan – they’d keep warm in the water. Opening the oven door for the twentieth time, the chicken didn’t really look brown. It was no longer pink, just a greyish colour. The cabbage was very floppy. Suddenly I felt a bit nervous. The friends had arrived and they were drinking cocktails a few feet from the kitchen door.
“How lucky you are to find a live-in cook! We’ll be banging on your door every week.”

I crouched in the kitchen and then silently laid the large marble topped table in the upstairs dining room, hoping that the chicken would miraculously brown and the cabbage would firm up in the saucepan. I found a plate for the chicken and put it on the dining table, along with the saucepans, arranged at dinky angles.

As we all sat down, the expectant chortles died away. There was a horrified hush as Smart Wife carved the pinkish chicken onto the cold plates. There was a problem removing the self-mashed potatoes and carrots from the serving spoon.

We ate in silence punctuated with the occasional bright comment from the friends. After the meal I cleared the table and swiftly retreated to my flat. Something had gone wrong. I just couldn’t quite put my finger on what.

The next day I got back from work and went upstairs.
“Fiona,” Smart Wife was hovering in the kitchen, “I’ve bought you a book. Thought it might be useful. Tonight it’s trout. I don’t know about you but I always clean them under running cold water, sprinkle them with seasoned flour and sauté them for five minutes a side.”
The horn rims swivelled in my direction.
“Yes that’s exactly how I do trout too.”
I glanced at the book. The title was emblazoned in red, “Poor Cook.” For the six years that I lived there, the book was never opened.

Gradually over the next few months Smart Wife taught me how to cook. We would go through the same procedure every day. She would show me the ingredients and explain how she would make the proposed dish. Mysteriously her method was always exactly the same as mine. My outrageous arrogance and mistakes were never mentioned. On particularly inedible evenings Kind Husband would silently top up my glass of wine with a wink.