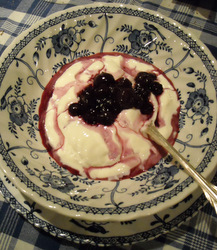 When I sat down to savour the superb third day of creamy Greek yoghurt and organic blackberries and blueberries bottled last October from our own garden, I just had to take a photo. This is now pasted on the kitchen wall to  remind me how good bottled fruit is when I’m caught up in the bottling frenzy that dominates September and October.

I do enjoy bottling fruit but sometimes it seems a bit of a palaver if I have other things to do.

Sitting by the pond on a clear and sunny morning as the fruit and yoghurt combination burst in my mouth I realised that home bottled fruit is to be treasured. Packed with flavour, harvested from our garden so it’s organic with not a trace of long life enhancing chemicals. Bliss.

Last year I was scratching around for jars in September. The local shops were packed with ridiculously overpriced jars so I ordered some Kilner Jars from Lakeland to supplement my stock of Le Parfait jars. I made the mistake of buying 1 litre jars. We don’t have a large family – just the two of us and the menagerie. The blackberries and blueberries were bottled in old 200 ml Le Parfait jars (with new seals)  and each jar gives me enough topping for five breakfasts. Somehow the bottling process enhances the flavour of the fruit so you need far less than the expensive imported fresh super fruits that are in the supermarkets now. And there is also the juice. So if you have a family of four then 500 ml jars would be perfect.

Our bottled fruit is so good that I’m already trying to get my jars lined up for The  Autumn Onslaught. Lakeland sale is now on but unfortunately the Kilner jars and Le Parfait jars are not on sale. Danny groans each time a Lakeland catalogue drops on the mat and This week suggested that it was unwise to even vist the site. Perhaps I’ll manage a quick peek when he is snoozing or engrossed in the football World Cup…or both!

Finally a penchant for football does have its benefits for widows – even if it’s just window shopping.