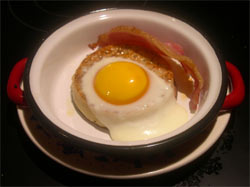 I love crumpets. The honeycomb texture cries out for butter and jam or honey. Danny picked some up yesterday and I found them in the bread bin this morning.

As he was out of the house, I decided to experiment and incorporate one into my breakfast. I would try grilling an egg on top of a crumpet. Hoping that he would return soon I had already grilled some bacon.

I set the grill to its lowest setting and put the crumpet, bobbly side up, into a small ovenproof dish. Then I broke the egg over it. It took a good ten minutes to cook.

Danny arrived back just as I was removing the dish from under the grill. He perked up as the smell of bacon and eggs wafted towards him and peered at the dish.
“What’s this?” He poked the yolk gently as I explained my idea.
“You can see why people don’t grill eggs. The yolk goes rubbery.”
D disappeared upstairs and I photographed the flop for the outtake archives.

However, even if the rest of civilisation never grills an egg, I had and was now ravenous. I peeled the hard skin off the yolk, revealing the soft molten yellow beneath. The dish suddenly looked so tempting and smelt so good that I decided to eat it anyway.

Despite it being Friday 13th, this was the luckiest break. The flavours of the first mouthful burst in my mouth. The crumpet had soaked up some of the egg and the combined texture and flavour was divine. It was gorgeous. So delicious that it was hard to consider giving Danny even the teeniest taste.

I had to walk upstairs with a fragment on the end of a fork. If he hadn’t been so sniffy I wouldn’t have bothered. The generosity nearly killed me.

Danny sampled the precious forkful and instantly ordered one from Room Service. This was a great excuse to try and improve the dish so I made a small crumpet sized nest out of aluminium foil to hold the crumpet and retain the egg. 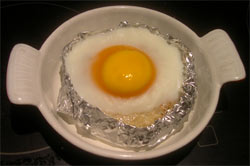 I set it into a baby gratin dish and placed it about four inches under the grill for 15 minutes (lowest grill setting). As the crumpet was contained in the foil, it was softer than the first open grilled one.

When it was ready Danny shot downstairs, peeled back the skin on the egg yolk and dived in. Room Service was allowed to sample a portion so tiny that even doll’s house occupant would have complained.

We have 2 crumpets left. A whole one each for breakfast tomorrow.