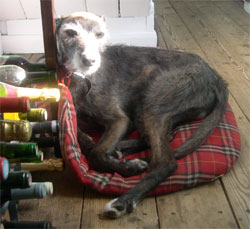 I reckon that there must be a few dogs in my ancestry as most dogs get along with me, even the difficult ones with a history of biting tradesmen.

Dashit had made an impression on the inspection visit. His owner holding him firmly by the collar as he roared and growled at me. After a vociferous struggle he was closeted in a separate room. It was clear from the thumps on the door that he didn’t like it.

The job looked fine, wallpapering a hunting scene in a mirrored bedroom. I wasn’t so sure about Dashit.

“Dashit, might growl and snap at you but if you ignore him he’ll probably be OK, when you let yourself in.”
On my first day, I lifted the letterbox and eyed Dashit, who was strutting gamely towards the front door on ancient stiff legs. His lips curled back over yellowish, sharpish teeth .
“Hello, Dashit.”
The terrier acknowledged me with the slow roll of an eyeball and positioned himself for my entry. Front legs apart and extra stiff.

I decided to let him wait a bit and cut out interaction. So I unloaded every piece of equipment that I might possibly need and stacked it on the safe side of the door. During the trips to and fro from the car, I worked out that if he attacked I could drop a bulky dustsheet over him and toss him into the sitting room. But having read “The Dog Listener”, I know that the best way to approach a dog like this is to ignore him.

Holding the dustsheet in one hand, I opened the front door, stepped through and closed it within 0.25 seconds. In the remaining 0.75 of a second I reached the bedroom whilst Dashit lunged forward into the space I had l just left inside the front door.

I observed him through the bedroom door. He caught my eye and looked away. Impasse.

As I laid the dustsheet, I could hear his stiff old legs shifting towards the bedroom door. Just as he reached it I was leaping over him to fetch the next batch of stuff. In the end he must have walked a good half mile as I rushed to and fro. Finally I was installed in the bedroom, he glanced in, clocked that I was permanent and repaired to the sofa in the sitting room for the rest of the day.

The first thing that his owner said when he opened the bedroom door was,
“How was Dashit?”
I knew at once that I had been lucky. I continued pasting.
“Fine. Is it an Indian name?” All along I had heard Dasheed.
“No, he has always been tricky and stubborn. We found ourselves screaming ‘Dash it’ in exasperation and those were the only words he responded to, so it stuck.”

Every now and then, Jalopy and I would spot the animated Dashit towing his owner thought the village. One day I saw that his owner was leading another dog. We instantly braked and asked after Dashit. From a distance I had become quite fond of him. A heart attack had felled Dashit. I looked at the replacement, clear untroubled eyes gazed back.
“The new dog is fine, friendly. Does not eat other dogs. Life is easy but…” There was a long pause before he swallowed hard and added,
“Not like Dashit.”

The photograph above is of my elegant friend Max, trying his best to look like Dashit. Some hope, as he is five times the size and could never roll his eyes to quite the right angle. He belongs to my friend Anna and once frightened me too. Nothing nasty just a Big Dog Bark. Owner and dog share the same slim, leggy figure and both have a penchant for good food and long walks. Neither could ever be quelled by a dustsheet.