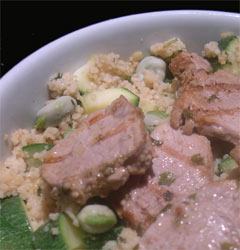 Fillet of pork is so tender and succulent but sometimes it can lack flavour. Danny bought two packs of medallions from the condemned food counter at Tesco and fried them in a little black butter. He sat down to savour this delicacy with a small proud wobble of his head. Within seconds there was a roar.
“They taste just like blotting paper!”

When I found myself with a pork fillet to cook, I remembered the shrieks and made a marinade. I used loads of fresh herbs for this. We had a great tip from some friends who used to run a restaurant (so successful they could retire at 50!) Put your meat in a plastic bag with the marinade and fold it tightly around the meat and put in the fridge. The meat is infusing the marinade it all day. There’s no need to turn the meat. And the results are spectacular.

Our fillet of pork sat in a lemon, coriander and chervil marinade for 8 hours and was transformed. Thinking about it now, I reckon that buying fillet of pork sliced into medallions was probably a mistake. They look pretty but must have dried out considerably by the time that they finally reached the condemned food counter. Our whole fillet was marinated as a mini joint and then sliced just before frying. This wasn’t proper frying – I used the griddle pan as I thought that the nifty stripes would look good. The flavour was on the edges of the meat. Just enough to enhance the centre of each medallion.

There were purrs from the opposite side of the table.

This is a quick and easy recipe and classy enough for an intimate supper Ã¢ deux.