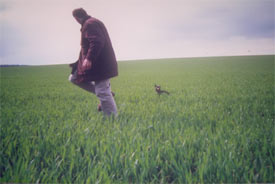 Fly, dashing constant companion and coachman, was my first Min Pin. He was a black and tan, loved motorways and high speed. He was far more intelligent than any other being that I have met to date. I would sometimes turn to find that I was being observed by his black gimlet eyes. On the rare occasions that I pulled the wool over those eyes, and left for an exciting spot without him, he would ignore me when I returned. For days.

Eventually, I’d curl up in his capacious basket. After a while he would creep up and scramble to reach the top. And there he would loll, enjoying the one-upmanship.

Fly was born to be a runaway dog. Out for a walk, he would suddenly put his head down and race for the horizon. Many a day I searched for him for hours, running through the complete gamut of responses, from:
“I will take him to the vet and have him put down. As soon as I catch him.”
To (six hours later). “Perhaps he is caught in a trap. I couldn’t bear it if he was in pain.”

Finally I would give up and return to the car for the tenth time. And there he would be, happily jumping about. Sometimes I was so angry that he was reluctant to get in the car. I would have to open all the doors and step back a good distance. Eventually, he would shrink onto the back seat and grovel all the way home.

Returning home, I’d dial the number of the “Boarding School for Delinquent Dogs.” Fly would stare up at me dewy eyed from the floor as I booked him in. For the next month or so he would walk to heel and return when called. The perfect Min Pin. Eventually, I would ring and cancel the course. It was a good school with a long waiting list so they didn’t seem to mind. Gradually our life would slip and slide back until one day when he would put his head down again and disappear.

He never attended the boarding school. He was far too canny. By the time he died, he had a reputation. Danny and I loved him and that fan club had just the two members. Danny held an Irish wake the day he died. A well attended event but I always suspected that the wine was more of a draw than the dog.

Fly had a poor start in life. His beloved mum had died shortly after giving birth. The distraught breeder had kept the pups in a tiny room (with minimal human contact). I was green and innocent when I went to pick him up and had no idea that this treatment would have an adverse impact on his life. I fell in love with Fly the moment that I saw him. But it took years for him to settle down and enjoy this arranged marriage.

Don’t assume that all breeders love their pups. Visit and observe.

Two of our present Min Pins are from a great breeder, in Wolverhampton. Min Pins are far more popular in the north of England than they are in the south. I am happy to drive miles to collect a new pup if the breeder is as good as Madeleine Whittaker. She loves her dogs and treasures her pups. She plays with them and cares about their future homes and owners.

If a pup isn’t played with during the first few weeks there will be Human/Min Pin bonding problems. You might bond with your Min Pin pup but your Min Pin may never really bond with you. I am sure that this must be the same for every breed of dog. Beware.