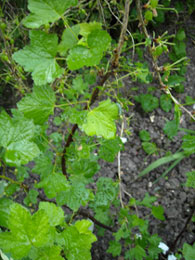 When I was at school and hadn’t revised properly for an exam, I put the main course text book under my pillow hoping that magically the information would be transmitted into my brain as I slept.

This guaranteed a restless night, especially if the tome was large. I’d usually wake feeling tired and stressed. Perhaps it was the adrenalin and desperation that made me creative with my exam answers. Generally I passed. But would have done far better if I had prepared properly for the exams.

These days my radio headset is a boon but often I’m not concentrating 100% on the programmes. I focus on topics that appeal and drift on the edge of other programmes that bob in the background just in case. Often I’m drawn in to a topic that I didn’t know existed.

Last night I stalked down to the kitchen garden to peruse the potential gooseberry and currant harvest. Both gooseberry bushes were stripped bare.

I immediately thought sawfly. I must have picked up this tip subliminally from Gardener’s World  (BBC Radio4) as I swooshed the green paint over my clients’ garage doors. Our gooseberry and currant bushes have finally come into their own after three years and were laden with blossom this spring. Tiny hands had clapped with glee at the prospect of fruit vodkas and chic jellies and tarts. We had planned giving gooseberry wine a go. The sawflies had eaten all the fruit and every bit of leaf from the green gooseberry bush but had left the fruit on the sweet red (dessert) gooseberry bush. Why?

We are sawfly virgins. So this evening I looked up sawfly on the internet and discovered that the gooseberry sawflies are also partial to red and white currants. My blood pressure immediately raced.

I shot down to the fruit cage and spotted hundreds of small caterpillars guzzling our currant bushes, and thousands of eggs waiting on the stalks to mature and continue the devastation.

So now we are at war, there are five of us (two humans and three Min Pins) up against millions of hungry and potentially ravenous new born caterpillars. Help!