Navigation Menu
Home » Chickens » Guest Spot: Henrietta. The chick that we hatched on our Aga by Janet Reading

Guest Spot: Henrietta. The chick that we hatched on our Aga by Janet Reading 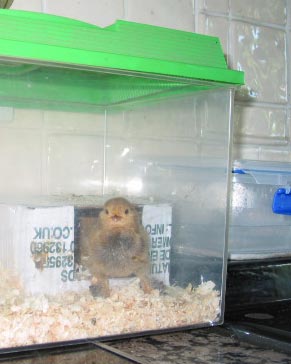 Eight days ago on June 12, Janet Reading sent me an Email. Her broody hen had died on the nest. The eggs were cold. She moved them to the top of the Aga and wondered what the right incubation temperature for the eggs might be.

I keep chickens but I am no expert. A friend of mine had hatched eggs on the top of the Aga so I knew that it could be done. I flew onto the internet and found this useful site. Emails raced back and forth.

There was silence until June 16 when she wrote –
“We’ve successfully hatched one of the chicks…. A Belgian bantam Barbe d’uccle millefleur. We have her (I hope) in an old fish tank on top of the Aga at about 30 degrees and she’s eating and drinking well. Unfortunately since her arrival we’ve done little else apart from fuss round looking at her.”

I was so pleased. Over the next few days the little chick seemed to get under my skin. I wondered what she was like/how were they were coping/what was going on at The Aga, Chateau Reading. Eventually my curiosity erupted. I just had to know. This was the response, publication kindly granted by Janet.

Guest Spot: Henrietta. The chick that we hatched on our Aga by Janet Reading

Well, our little Henrietta is very loud and active. She goes for a run in the garden when the weather allows, which is not often at the moment. She is growing fast. She lives on top of the Aga in a plastic fish tank. She has a bowl of chick crumbs and one of water, which has to be changed 2 or 3 times a day. We made her a little cardboard box/cube with a hole at the front at the warmest end of the house. She does seem to prefer standing on it than being inside. We’ve introduced her to our one remaining hen who was completely disinterested, but better than going for her.

My biggest worry is that she’s going to grow up thinking I’m her Mother and she lives in the kitchen, but we’ll cross that bridge later.

She likes me to make a house with my hand on the grass and then she uses it like she would her Mother and dives in and out.

We have a wormery for composting, so yesterday she got her first taste of worm. We held it for her just like we’d expect her Mother to do for her. Then we threw another, very little worm on the ground and made her find it for herself. 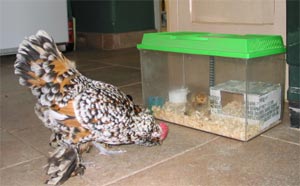 Well, you will realise from this, that this tiny bundle of feathers is seriously impacting on our lives. We decided to try to hatch the other 3 eggs on the Aga, I’m not certain how this will be, but I’m not prepared to risk losing another broody hen.