Posted by Fiona Nevile in Curing and Smoking | 7 comments 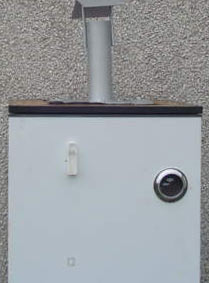 I’ve been chatting to Smoking Methusala for a while. He cures and smokes his own bacon on a hillside in Wales. He has agreed to share his knowledge with all would be bacon smokers out there. I’ve heard of a man who smokes fish and bacon in an old wardrobe but this story takes the ticket for best smoking tale that I’ve read so far.

I’m going to tell you a something about our setup here. We live in a little Welsh village, way up in the mountains in a very isolated area. No shop or Post Office, but we do have a church and two pubs. Now that must have some significant meaning in itself 🙂

The view from every window would be the envy of any city dweller and despite having lived here for 20+ years we still appreciate it. The main thing about being isolated and out in the wilds is that when friends do come and knock on the door, they haven’t come to borrow a cup of sugar.

We are not fortunate enough to have an open fireplace and handy chimney to do our smoking so we were obliged to purchase/acquire a dedicated outside smoke room.

My Son-in-Law, James, is engineering minded and I am an ex engineer so we decided to create a smoking facility. I’m sure you know that if you ask a pair of engineers to make something, you’re going to get something that will be capable of doing 500 times what you want to use it for, And be so complicated to operate that you might need a college degree to fire it up. James and I made a conscious effort to simplify our ideas from the start 🙂

Fetching the obligatory case of Budweiser we sat down to brainstorm. Oops not allowed to say that any more, to be PC we have to have a Thought Shower, as brainstorm may offend.

June brought us 2 cold Budweiser’s from the fridge and we spotted our first mistake. We would have taken 2 from the case we were sat on and they wouldn’t have been chilled! See what happens when engineers get together, basic ideas fall by the wayside LOL.

During a thought shower we’re allowed to steal other people’s ideas and modify/improve them. So we chatted about Gordon Ramsey’s smoking system which utilized an old Robin Reliant body as a smoke room. We don’t have a Robin Reliant but we do have an old wooden garden shed.

We’d mentally coated the inside of the shed with tin foil to make for cleanliness and had attached a short chimney on the roof. We decided the ill fitting door was fine as it would allow through draught to keep the smoke density down.

Right, so we had our smoke room ready. Now for the smoke generator.

Great this is going really well, and the Budweiser is going well too.

Ah. Design fault 1. The smoke won’t happily go down hill so how are we going to get it to enter the low area of the smoke room?

Engineers work around: Modification 1a, put the smoke room on stilts so the smoke pipe can run horizontal from the generator.

Design fault 2. The smoke room door is now 3 feet from the ground. Modification 2a, Build a flight of steps to the door.

Looking good now and the Budweiser’s working well too. We have the setup envisaged, Now for the real test. Draw up a complete set of plans and show it to a layperson and ask them for their opinion.

The only lay person here is June who has a B.Sc and a B.A. We decided to run it past her as she will be using it too.

A rough translation of her comments was,
“You must be mad, the pair of you!! How much Budweiser have you had?”

We returned to the drawing board. Went outside with a fresh Budweiser and sat on the old fridge. Did I say OLD FRIDGE, I should have said, we sat on the NEW SMOKE ROOM!

The fridge was given a reprieve from the council tip and became the SMOKE ROOM. The smoke generator was the next item to work on. It is now a small fireplace about the size of a coffee mug made of aluminium. It has a fire grate with a chimney in its side and a tall
hopper above that slowly drops wood shavings on to a smouldering fire that fits into the palm of your hand.

Air is blown up through the fire by a small tropical fish tank pump. It smokes for about 4 hours on a single load and can be topped up with fresh shavings/sawdust at any stage during the process without interrupting the smoking process as it is attached to the outside of the smoke room.

The moral of this story is if you task a couple of engineers to design you something, give them a free crate of Budweiser to get them thinking and you may get something that works. Oh, make sure there’s a woman around.