Home grown presents and the joy of radio 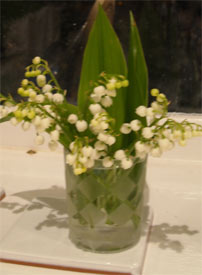 Photo: Lily of the Valley

I’m working for a very sparky couple at the moment. I’ve been with them on and off for years now. They were the first people to employ me as a professional decorator – I painted their stables. On the way to do the initial quote I had to pull over in Jalopy to get my breath. I was really nervous. This summer I’ll repeat the exercise but six years later I have got a lot faster, so it will be the same price!

Swallows nest in their stables in summer and add a dash of added wildlife enjoyment. Swallows are so elegant and beautiful to watch.

Every three years or so, the Georgian windows and doors on the main house need to be painted inside and out. There are thirty eight windows and doors.  This equates to 266 coats of paint. Alarming if I think about it – it’s a long steady treck. Inside it’s two undercoats and one top coat (eggshell). Outside it’s two primer undercoats and two top coats (Sadolin Superdec). I’m grateful for the work but fit it in atound other bookings so that I don’t loose momentum.

My sports digital headset radio is the tiny friend that helps keep me sane. In the past I have watched wagtails and green woodpeckers as I listened to Thomas Hardy’s “The Woodlanders” on digital OneWord. I had studied this novel for ‘O’ level, ‘A’ level and at university. But suddenly it came alive as I stood in the cherry picker and surveyed the estate. A wonderful tale to hear against the backdrop of secluded rural England.

OneWord is now sadly defunct. These days it’s Radio 4 or Radio 7 so I can breeze through the kitchen with news bulletins. But I do miss someone reading books to me all day.

Even though I read English and Drama at university, I have yawning gaps. Gradually, OneWord filled these and I was transported into hundreds of other worlds.  As Hugh Grant stated when he was caught in a tricky situation and asked whether he would now go into therapy, he replied
“The English don’t do therapy. They read novels .”

OneWord was a joy and I was very sad when it went off air. There were no news breaks, which was great when I wanted to ostrich out from a crisis. I loved the readings. They also made a lot of humungous boobs which tickled me. Once instead of the rather dry biography of Beethoven we had an episode from The Borrowers. Topped and tailed with a Beethoven introduction and relevant goodbye.

I exchange small presents with my clients who own the estate. Mine are usually ‘morning fresh’ eggs, home cured bacon or cucumbers later in the season. My hostess gives me much more imaginative presents. A fresh handful of bay leaves, a bunch of fragrant Lily of The Valley (I just can’t seem to grow this plant). A couple of weeks ago she gave me the violet “Freckles” alongside an aquilegia. I love both.  And this week, three bunches of superb asparagus from their beds, tied carefully with string and ready to drop into the asparagus steamer . I would almost kill for fresh asparagus as we don’t grow it yet.

I’ve tried in the past to raise asparagus in the cottage garden. I planted three crowns in a neglected space. Disaster. They threw up heads that were so thin that I didn’t even notice them. Since then I’ve discovered that you need to plant at least 20 crowns for a decent harvest each time that you cut. Also, you are looking at a three year time frame and preparing a squeaky clean, weed free bed. Weeding has to be minimal when the crowns are in place. Bindweed could scupper even the best laid plans.

Last night I suggested that we dug up some of our herbaceous borders to dedicate to asparagus. Danny was not over enthused.
“It takes up so much space and the season is so short. If we had a bigger garden I’d give it some room. But not now.”

In my terms we have a big garden. I’m very tempted to use some of the unused space in our front garden. Next Spring Danny could be delighted with a small harvest of knitting needle sized spears. And in three years time we could be cutting sizeable stalks that would be ultra fresh and tasty.

As my mum says. “You always thrive on a challenge.”