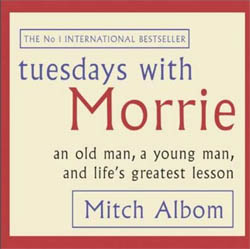 A new Internet friend wrote to me saying how good it must be to have the time to escape through reading. I haven’t been doing this recently. Nor listening to the radio. Just doing the blog and tending my seedlings. All reading has been directed to increasing my knowledge of biodynamic gardening.

“Yes,” I thought when I read her email, “she is right. I need a distraction. To escape into another world.”

The next morning I woke to find that the books had shifted on the big bookshelf beside my bed. We have a lot of books and the books in my bedroom are doubled up on the shelves. In the gap behind a fallen book another caught my eye. It was the simplicity of the cover and the title that attracted me. Tuesdays with Morrie

I don’t remember buying this book. I certainly hadn’t read it. I crept back to bed to join the bickering Min Pins and opened the covers.

Mitch Albom had been very close to his professor at college. Morrie Schwartz was a truly enlightened soul and, as a mentor, brought out the best in him. Mitch lost touch with his professor after he left. He was driven by ambition to work and work and make more and more money. In fact he became a workaholic. Materially successful yet unfulfilled. He didn’t realise this at the time.

By chance he happened to see an interview with Morrie on a late night TV show. He was shocked to see that Morrie was dying of an incurable illness and felt compelled to visit his old professor, whom he hadn’t seen for 16 years. 700 miles later, Morrie was sitting on the porch to greet him even though he hadn’t announced his visit. It was almost as if they hadn’t lost touch.

This book is their last thesis together. It charts the weekly meetings that Mitch and Morrie had until just a few days before he died. There was no sequel by the professor.

It is beautifully written. I felt that I was beside Morrie too. It’s funny, honest, moving and thought provoking. Above all it’s a true story about a man who loved the world and wanted to share his secrets. And about a young man who had achieved so much, in a worldly sense, but had lost his way.

I couldn’t put it down. As I delved deeper and deeper, I realised how precious the teachings are – these are the thoughts of a man who is dying but still able to reach out to the world. His vision both enlarges and simplifies as his world becomes smaller and he becomes more physically helpless.

I put off reading the last two chapters until this afternoon. I knew that I would cry.

I had begun to love Morrie too.