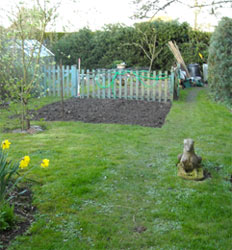 The one photograph that stands out in my mind in Hugh Fearnley Whittingstall’s first River Cottage Cookbook is the picture of a fenced vegetable garden with a large plot outside the confines.

We now have this too. I saw HFW’s photo before John Coe and I created our kitchen garden a few years ago, and was careful to create enough space for what I imagined would be natural growth.

Obviously, I had no idea how much space our vegetables would require. John wanted to contain everything into a small area that we could easily nurture and sustain. He knows that we don’t have a lot of time to tend vegetables. So we settled for four 12 foot square beds. It seemed vast untilI started to plant seeds.

Within two years I was planting extra veg in tubs and pots. And this spring Danny and I decided to extend the kitchen garden beyond the confines of the fences.
“Let’s give spuds one final go.”  We lost the last two years of potatoes to blight.
“Why don’t we grown the potatoes in large four spud ridges, like my father did back in Ireland?”
“Let’s make a new plot. I’ll give John Coe a buzz.”

John doesn’t work in deep winter. He has a three month break between December and April. Somewhere deep inside I knew that John wouldn’t be happy. He would happily dig over the new plot well but he would not:
• approve of the ‘foreign’ ridges
• welcome our own seed potatoes (I had Maris Pipers chitting – perfect for the soil in this area.)

“Hello John. I was wondering if you’d like to start this week and help us out?”
“Of course.”
“We’re planning a new potato plot. Outside the kitchen garden, in the orchard area.”
”No problem.”

John reversed into the drive at 7.45am on Wednesday morning. He glided into the cottage proudly holding a tray of well chitted seed potatoes and my heart sank. How was I going to explain that we wanted to try Irish ridges? That we had enough seed potatoes already?

Over the next gossipy half hour drinking coffee, I explained that Danny wanted to experiment with the sort of ridges that his father had used. John’s face flickered. I also pre-empted the possibility of discovering our chitting potatoes.
“I bought some seed potatoes a month ago. Maris Piper.”
“They are very good.” The tone was terse, for John.
“But I’d love to try yours. They have really good shoots. What variety are they?”
“Arran Pilot.”
“Let’s put a couple of rows in the border with your broad beans. I bet that yours will do better.”
He looked blank and I felt a pig. He’d brought the seed potatoes and probably imagined planting them in his new border.
So I added: “I was hoping that if I let Danny have his head with the potato border that he might give get the veg growing bug and give me a hand with the vegetable garden.”

John managed not to laugh. He knows that Danny has to be cajoled to lie on the swing seat in the garden. He observed me with a kindly, sympathetic nod.

The 16’x12’ border was dug in an hour. By a man in his 70s. Impressive, to say the least. Turf neatly piled up for repairing the muddy Min Pin path that destroyed the lawn this winter. 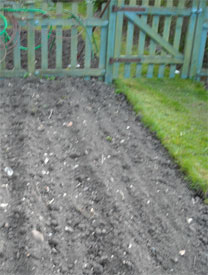 When I returned from work that evening I spotted two small ridged rows beside the broad beans. John had planted 24 feet (8 metres) of Arran Pilot potatoes.
“He took the rest of his seed potatoes away with him,” Danny explained. “Let’s hope that his spuds do better than ours.”
John had also mowed all the lawns and edged the borders.

I rang John immediately to thank him. Within a couple of minutes he was discussing the soil in the new bed. He’d found just one brick and  a few stones but almost friable loam.
“I reckon that after 17 years we’ve finally struck gold. This must be the old basket weavers’ vegetable patch.”

Hooray!  Suddenly I’m eying up the rose walk. As far as I can remember there were no stones there when John dug the borders years ago.