Navigation Menu
Home » Christmas » Oh Mistletoe where do you grow? By Steve Kirk editor of The Bushcraft Magazine

Oh Mistletoe where do you grow? By Steve Kirk editor of The Bushcraft Magazine 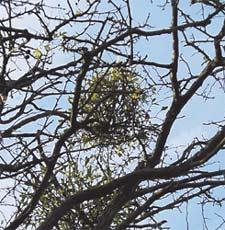 Photo: Mistletoe in a hawthorn tree © The Bushcraft Magazine

This article was published in a past edition of The Bushcraft Magazine. We are friends of this superb bimonthly. A subscription to this periodical could be the perfect Christmas present for anyone who likes some contact with the Great Outdoors, even if they live in a high rise in Walthamstow.

Each issue is packed with really interesting articles, photographs and great ideas. It’s subscription only like most smaller magazines and arrives in the mail. You cannot buy it on the news stands or WH Smith. And that’s what makes it so special. It’s independent and not locked into expensive distribution, advertising contracts and advertorials.

We think it’s a real breath of fresh clean air. Here you might find an article on road kill cooking nestled beside an article on the phases of the moon and the reason why Druids still practice today. It has massive appeal. At the outer edges we know a 12 year old and someone hitting their late nineties who both subsrcibe. Each article is a true gem. And for £14.00 a year (including P&P) the subscription is a bargain.

When I drove into Cambridge today, the trees in the Botanical gardens were laden with mistletoe. It is flourishing in East Anglia with the promise of many thousands of kisses that I hope will extend beyond the Christmas holiday.

Oh Mistletoe where do you grow?

Unless you live in the shires of Hereford, Worcester, Gloucester or Somerset there is a high probability that you have never seen a native wild Mistletoe growing in its natural habitat. Outside of those four counties where it occurs in abundance, this hemiparasitic (partly parasitic, partly independent) plant is scattered, scarce and hard to spot high in the branches of trees or concealed in old orchards.

Despite this, it is by no means endangered or truly rare. On the continent it is common, particularly in France, from whence we have imported large quantities annually for over a century. Worldwide there are over 200 different kinds, including some that are pests of timber and forestry. In Britain, however, a lone representative, Viscum album subspecies (ssp.) platyspermum is at the edge of its range and conditions are evidently not universally suitable.

Wherever you live, mistletoe is best spotted in the winter when the host tree has shed its own leaves and is burdened instead with a fuzzy round or oval bush of evergreen in its upper limbs. From a distance it may resemble a magpie’s old stick nest, except that in good light a hint of green is visible and the leaves tremble in any breeze. The twiggy clusters in birch trees, known as ‘witches’ brooms’ may also fool you at first. Keep an eye out for mistletoe on long car journeys (if you are a passenger) as it is sprinkled across most counties in England and occur along roadsides.

In general, mistletoe is propagated by birds, most especially the Mistle Thrush who, when finished gulping down the berries, wipes any seeds from his beak onto a branch, or deposits his droppings in another tree top. If this is of the same species as hosted the plant on which it fed, the sticky seeds may germinate in a bark crevice after six weeks and penetrate their thread-like roots into the living tree. They are slow-growing and do not flower until five years later – a good reason for selecting a longlived host. The male and female flowers occur on separate plants and are pollinated by insects, some of which, such as the Mistletoe Tortrix Moth, are associated exclusively with the mistletoe.

The thrush is not the sole distribution agent for this plant. There is an unmistakeable, if slightly puzzling association with man-made habitats – mistletoe is found most commonly, usually well out of reach, in orchards, parks and gardens and cultivated hybrid trees, such as poplars and limes.

Situated some 35 miles South-west of Birmingham at the confluence of three counties, Worcestershire, Herefordshire and Shropshire, the small historic market town of Tenbury Wells forms the hub of the UK’s mistletoe trade. Small-scale and wholesale trade in mistletoe and holly has taken place there for over a century. The long-established orchards in this region of high mistletoe occurrence engender a rich and sustainable supply of English mistletoe, while the market provides an incentive to smallholders and farmers to maintain the resource. Recently a Tenbury Wells Mistletoe Festival has been held in late November and early December. National Mistletoe Day (December 1st) was established in 2005, and endorsed by Parliament.

Among the many items for sale on their web-site, are grow-your-own packs of 40-50 berries, complete all the relevant information and instructions. These are available from February, the best time for seeding, but can be pre-ordered at any time. Germination of mistletoe berries is poor, hence the high number of ripe berries needed. Christmas ones are immature and therefore unsuitable, although if plucked without splitting and ripened-up like tomatoes, you may be lucky. Chances of success increase if you endeavour to propagate your berries on the same kind of tree as the one that hosted their parent mistletoe, or if you choose the commonest host trees – apple, poplar, lime or false acacia (Robinia). Best not to choose your favourite fruit tree or surreptitiously use your local orchard, as the growing mistletoe will affect the productivity of its host, and besides, may be lopped of in pruning operations.

Some people make a slit, insert the sticky seed below the bark, tie it in place and cover it with Hessian for protection from the birds. These seems like a lot of trouble to go through for what is after all, a very hit-and-miss affair and not the course chosen by Nature. It may be UK distribution of Mistletoe. It is equally as effective to smear a berry or two into fissures in the bark on a branch (not too thin as mistletoe can grow quite sturdy), as high as you can and open to light. Then be patient, as even if successful, it will likely take several years before you get berries.

We know from one contemporary source, the Roman writer Pliny (the Elder), that the wise-men of our Celtic forbears, a.k.a. Druids, revered the mistletoe when it was found growing on their sacred oaks, though curiously, oak is rarely the bearer of mistletoe. It seems that in a ritual harvesting, the plant was cut down with a golden sickle and caught in a white cloak in order to prevent it from coming in contact with the ground. Two white bulls were then sacrificed.

This took place six days after the new moon following the Winter Solstice, and marked the start of the winter celebrations, in effect ushering in the new year. Symbolically mistletoe can be seen to be the perpetuation of life in apparent death – green when its host appears bare and lifeless. It was also seen as a divine union between Heaven and Earth. If so, the European tradition of kissing under mistletoe at New Year would tie in more closely with this practice. However, the timing over here has been fixed by Christmas our closest Christian festival. The use of mistletoe continues today despite a ban by the early church because of its association with the old Pagan ways. The custom that we should pluck a berry from the spray with every kiss under the mistletoe and when they are all gone the kissing should stop, conveniently seems to have been forgotten.

The detail of the fruiting winter plant is well known to everyone. The paired, evergreen, leathery, propeller-shaped leaves on the end of the stalks and the waxy, round, white berries clustered at the joints are, after all, in our houses every Christmas. The small, inconspicuous yellow-green flowers are rarely seen.

A word of warning; although birds can eat them, mistletoe berries are poisonous to humans. Ingesting them can cause severe stomach cramps, diarrhoea, and a dangerous slowing of the heart rate. Other symptoms include hallucinations, convulsions, increased blood pressure, heart attacks, cardiovascular collapse, and often death. The skilled herbalist, or even the conventional medicinal practitioner in parts of Europe, can balance its properties to healing effect, however. Its use in the treatment of cancer is controversial but it appears to have had some success. The plant is currently the subject of much scientific analysis but is by no means as yet fully understood. Mistletoe herbal tea is popular across much of Europe and said to be effective for high blood pressure and arteriosclerosis. In North America the mistletoe used at Christmas, is a different species, Phoradendron flavescens, native to that country, and is also highly toxic.

Distanced by time, we still feel compelled to perpetuate the mysterious lost rituals and symbologies of our early cultures, either as modern Druids, or with a chaste kiss under a seasonal sprig, far removed from any ancient fertility rite, but ensuring, nevertheless that many human hands are directed towards a sustainable future for this strange plant.