Posted by Fiona Nevile in Jam Jelly and Preserves | 265 comments 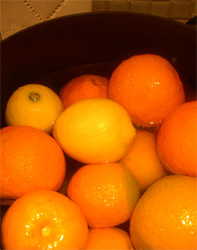 As the topping for the best slice of toast of the day, good marmalade is a joy. We like it dark, chunky, hand cut and never in moderation.

Marmalade was the first preserve that we made. We were so proud of it that we could hardly bear to move it from the worktop to the larder, let alone eat it. Eventually we opened the first jar and lavished it on slice after slice of hot buttered toast.

We immediately christened it Intellectual Marmalade as so much ground work, research and care had gone into its manufacture. Visitors who spotted the label were wary of it at breakfast. Would it somehow have an effect on the brain? When they saw us slopping it onto our toast they happily did the same. No one ever mentioned the name.

We like dark old fashioned marmalade. We couldn’t find a recipe for this so we based our recipe on the classic Seville Orange Marmalade in Delia’s Complete Illustrated Cookery Course

. We ignored the rolling boil stage and then let it simmer slowly for hours to achieve the dark colour and depth of taste. We tested it for set every twenty minutes. It nearly killed me (I was up for most of the night). Simmering for hours was a key tip from my mother whose marmalade is excellent (I suspect that her inspiration is Mrs Beeton, with knobs on). She wasn’t forthcoming when we dared to ask for the recipe. Update: my mother uses a Pru Leith recipe and adds a couple of tablespoonfuls of molasses to get the dark colour. We recommend the Delia recipe – but simmered very gently for a good six hours to achieve the dark colour and depth of taste naturally. However, I would recommend tasting it every hour or so. When you get the flavour that suits your palate bring the marmalade to a rolling boil immediately and test every 15 minutes for set.

Marmalade can be a bit of a palaver. It starts with hunting down and bagging the fruit. Despite many forays I couldn’t find any Seville oranges this year. Just as I was about to give up I saw them twinkling out in the Cambridge market on Monday. Investing my small change in three kilos of the fruit, I staggered back to the car park with just enough cash to release Jalopy from the gloomy depths.

Having made no notes on the timings of our Intellectual Marmalade recipe, I couldn’t face another day/night of babysitting the bubbling vats. I was determined to find the best old fashioned marmalade recipe, with proper timings. A couple of days ago I discovered a Dark Chunky Marmalade recipe on Delia Online. It’s made in two steps, so it’s great if you are working full time as you can spread the process over two evenings (I would recommend a spreading the task over a weekend unless your evening starts at 15.00 hours). Seville oranges will survive happily in the fridge for at least a week. They keep for months in the freezer and, if you have the room, you can stash them and make fresh marmalade throughout the year.

We have finally made Delia’s Dark Chunky Marmalade. We combined her recipe with our method and simmered ours for a good six hours before setting point was reached. It looks divine and tastes even better than my mum’s. I’m amazed that Paddington Bear hasn’t dropped by.

N.B. If you try this recipe, the poaching liquid is used in the final marmalade. The recipe isn’t very clear on this point and I found the answer in the DeliaOnline forum (press the Community button on her site to access this great resource). Also you need a very large pot! To stop all the peel rising to the top of the jars let the marmalade cool a little before bottling in sterlised jars.

We now have several new recipes for Seville orange marmalade to suit every taste:

A super three fruit marmalade. A best seller on our gateside stand.

Easy Seville orange marmalade. This fine shredded marmalade is a classic and gets the thumbs up from my mum and is really easy to make!