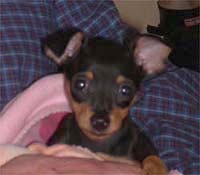 The rats are back.As soon as the corn is cut the rats return. It’s war. We’ve tried everything to keep them away. One year we supplemented poison with rat traps (a giant version of a mouse trap) but they were very difficult to set. Then we hosted a rat shoot. Great fun but not effective. Another year we just hoped that they’d get fed up with living here and did nothing. We spent Christmas with rats that threw wild parties in the kitchen ceiling. Now I’ve found a poison that works quite quickly. We keep a large drum of it in the barn, beside my poisoning gloves.

Our Miniature Pinscher dogs were bred in Europe as ratters. Inca, our seven month old Min Pin puppy, caught her first rat a few days ago. She shot through the dog flap and tossed her kill into the air. The rat hit the floor, on its back with legs askew. One bright black gimlet eye observed me. I thought that it probably was dead but how could I tell for sure? The dogs were keeping well back and this made me a bit jumpy as I made a glove out of three plastic bags and approached it gingerly. It was floppy and still warm. It’s now waiting in the dustbin to be collected with the other rubbish.

By the way, the photo is of Inca at seven weeks not seven months.