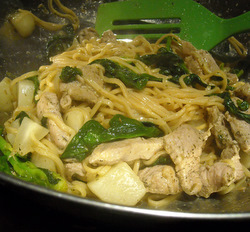 Pork fillet can sometimes be a bit disappointing – especially when it is sold as medallions. We’ve discovered that if it’s marinaded for an hour before cooking, sliced and cooked very quickly it’s delicious. In fact I think it is one of my favourite types of meat for a stir fry.

I’ve been making quite a few stir fries recently. They are quick and it’s fun to play with the ingredients. For years I got the wrong end of the stick regarding stir fries – imagined that everything had to be fried in oil. Of course you can use oil but you can also use stock or the water that you’ve cooked the rice or noodles in (or a combination of all three).

In this stir fry we use the marinade to cook the pork in our wok – why discard all those yummy ingredients? Last night I spotted a foreign body in our wok. I’d quickly rinsed some broccoli and spinach from the allotment and a pale green caterpillar had made a one way trip into the wok too. And no I didn’t really seriously consider serving it to Danny – it was just a fleeting thought.

Another reason for the stir fry mania is the yacon that we grew last year. It is wonderful combined with pork and sweet chilli sauce and has been great in every stir fry that we’ve introduced it to.

300g of pork fillet (if you have more veg you could probably get away with 250g)
Egg noodles for two
200g of yacon – peeled and sliced into chunky pieces 2.5cm wide and 1.5cm deep (if they are not going to be used immediately toss them in lemon juice to stop them turning black) If you are not a yacon grower, water chestnuts would be a reasonable substitute.
A couple of large handfuls of spinach leaves –washed and shaken well
A handful of sprouting broccoli or calabrese in season – washed and roughly chopped
6 tablespoons of sweet chilli sauce*
A good dash of chilli sherry – or white wine or even water!

Ingredients for the marinade:

An hour before cooking cut the pork fillet into bite sized pieces, place them in a plastic bag and pour over the marinade. Squish the bag so that the pork pieces are evenly coated. Roll up the bag tight and leave out of the fridge for an hour.

Cook your noodles according to the manufacturers instructions. Keep in a warm place.

Heat up your wok (on the high side of medium setting) with a little olive oil on the base (1 tsp). When the oil is just starting to smoke, add the pork fillet with the marinade and add the splosh of chilli sherry. Whizz the pork pieces around the wok so they cook evenly – this should only take a couple of minutes or so.

Add the yacon, spinach, broccoli, sweet chilli sauce and stir like mad for a couple of minutes. Add the noodles, serve on warm plates (giving yourself a little more so that you don’t have to fight for seconds). Prepare for tumultuous applause.

*Sweet chilli sauce – I’d like to have a go at making this myself. Any good recipes or ideas would be welcomed. Yacon can be made into a sweet syrup so that might be a great starting point – what do you think?