Posted by Fiona Nevile in Curing and Smoking | 16 comments 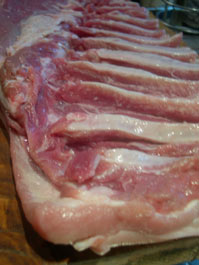 Belly of pork before curing

Having had a baconless weekend, I have been actively seeking a new butcher. I’m told that there’s a great independent butcher in Bury St Edmunds, 14 miles away. When I next have a Saturday off, Jalopy and I will be pointed like an arrow towards that lovely old Cathedral city.

In the interim, we’ve tasted some ‘good’ commercially produced bacon and been amazed at the thin and wishy-washy flavour and at the price. Even at special offer prices, bacon is a luxury. Finding a good pork supplier is now a priority.

I drifted into Tesco yesterday with the faint hope that I might find a loin or belly of pork joint. There were loads of pork belly joints trussed up with string – I suspect to make them look more tempting as a roast. At the back of the shelf I unearthed a diminutive loin of pork joint. On Special Offer. This would make great back bacon for half the price of the slices that are sold in packs of six in the local shops.

When Danny spotted the joint in my basket, I was given a hero’s welcome.
“I‘d begun to take our bacon for granted. Now I really appreciate what we’ve enjoyed for months.” D was effusive.

The small joint is curing as my fingers fly across the keyboard and will be smoked in our inglenook fireplace on Friday night.

When Tessa’s husband tasted our bacon his response was simple.
“We have to make this at home.”
As she doesn’t have kitchen weighing scales and doesn’t like salt, she played with our recipe. She brought round some sample slices and we discovered that her bacon tasted better than ours. But that’s what it’s all about – sharing and adapting.

So I tried her recipe. It uses far less salt than our original recipe and the bacon tastes wonderful. She smokes her bacon in a chiminea which has been adapted with a long piece of ducting pipe.

Having been smoked, our bacon lasts well for about a week in the fridge. It would last for much longer if we used more salt. I freeze it in ‘breakfast for two’ sized packs after slicing. It unfreezes quickly when the time comes and guarantees ultra fresh, tasty home cured bacon every time.