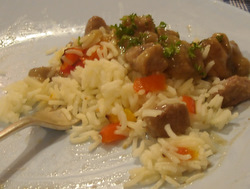 Danny bought some pork shoulder steaks this week. He wanted to try out a pork, mushroom and cream recipe that he had found at the local supermarket.
“The pork is sautéed in a pan. I don’t feel confident as I reckon that it should be fillet.”
He was right – the pork was chewy and disappointing.

It wasn’t Danny’s fault. Shoulder was the wrong cut for the recipe unless you really want to put the sharpness of your teeth to the test. He did however make an excellent rice and bell pepper dish to accompany the pork. This was the perfect foil to the fattiness of the meat and would probably work well with a lamb based dish too. By cooking the peppers seperately and stiring them in at the end their sweet flavour was enhanced.

Yesterday I decided to try cooking the three remaining steaks in the slow cooker. The dogs have munched through a handful of my cooking disasters recently, so this time I was absolutely determined to make something tasty. Surely slow cooking would improve the texture and flavour of the pork? The slow cooker angel must have been fluttering about as the final result was superb. Tender flavoursome pork on a bed of Danny’s bell pepper rice. This recipe would be perfect for a budget dinner party and would feed four with a starter and pud.

Put all the ingredients from the “At the beginning section” in the slow cooker/crock pot. Stir well. If all the ingredients are not covered with liquid top up with a little extra water. Put the lid on and set it to high. When the mixture is bubbling stir and leave (lid on) for two hours.

Then switch the temperature to low for an hour. Check that the pork is tender and if necessary continue cooking for a bit longer.

When the meat is tender drain the juices, using a sieve into a separate saucepan. Put the meat and the rest back into the slow cooker to keep warm (dial turned to off).

Add a little of the juice to the cornflour to make a paste, stir this into the liquid and simmer until the liquid has thickened and reduced by half.  This step is important as it concentrates the flavours.

Meanwhile prepare the peppers and the rice.
Put the chopped peppers into and oven proof dish and coat them with the olive oil. Pop them into a preheated oven at 180c fan for 15-20 minutes. Andrew took care of this for me. They could also be gently cooked in a sauteée pan (with lid) on the hob.

Rinse the rice under cold water and bring a saucepan of water to the boil. Add the stock cube, rice and a large pinch of salt. Bring to the boil and simmer the rice following the timings on the pack – our Basmati rice takes about 12 minutes. Stir the soft peppers into the rice just before serving.

When the rice is ready, add the pork etc to the reduced sauce. Season with salt and lots of ground black pepper. Add a dash of chilli sherry to taste. Serve on a bed of Danny’s rice with a good sprinkle of freshly chopped parsley.