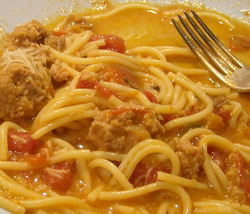 I had a yearning for spaghetti and meatballs yesterday. I have no idea why as I don’t think that I’ve ever eaten this dish in my life but somehow the combination appealed. I spent a morning in the kitchen creating the sauce. My challenge was to use as many dehydrated ingredients  as possible and some of our home bottled/canned tomatoes from the autumn. Incidentally these are delicious and I will be making much more this year.

The meat wasn’t dehydrated – I haven’t tried doing meat yet – but I had found and defrosted some *CFC veal lurking in the freezer that would be perfect. Pork mince would also be fine for the meatballs but I reckon beef would overpower the subtle sauce. Danny’s brother Donagh taught me how to make meatballs, delicious melt in the mouth ones.

The sauce is full of delicate flavours and the cornflower gives it a creaminess.  By using dehydrated vegetables there is no need to fry the onions so the sauce is really low fat. With 18 chubby meatballs I reckoned there was enough for two meals for us. When I lifted the lid off the wok this morning there were only four meatballs left. Someone had crept down in the night for a midnight feast. And it wasn’t me.

You need a giant dish for this if you are going to cook all the meatballs at the same time as they should not touch. In the end I used a wok – which worked fine. Meat balls freeze well and are perfect for making food in advance.

Spaghetti and veal meatballs in a light tomato sauce (for 4)

Ingredients:
For the meatballs:
450g of veal or pork mince
50g of fresh breadcrumbs
4 tbsp of milk
1 medium egg (beaten)
Dash of salt and pepper to season
For the sauce:
800ml of home bottled tomatoes
2g of dehydrated celery
10g of dried mushrooms
8g of dried onions
1 tsp of garlic granules
Half a tsp of dried savory (herb)
1 tsp of Hoisin sauce (secret ingredient!)
250ml of hot stock made with boiling water and 1 tsp of vegetable powder
Towards the end:
2 heaped tbsp of cornflower mixed with a little boiling water to thicken the sauce
1 tbsp of grated Parmesan to serve
Method:
Add the milk to the meatballs and allow to soak in.
Put the mince into a bowl and season with salt and pepper.
Squeeze the milk out of the breadcrumbs and stir them into the mince evenly.
Finally add the beaten egg and stir. Form the meat mixture into balls the size of a walnut and pop them into the fridge whilst you tackle the sauce.
Empty the tomatoes into a very large saucepan or wok.
Add the dried mushrooms, celery, garlic, onions and savory.
Add the stock and stir well. Simmer this sauce gently for about an hour (lid on).
When the dehydrated vegetable have softened add the cornflower mixture and sir well.
When the sauce has thickened carefully add the meatballs making sure that they don’t touch each other, and simmer for 10 minutes (lid on). Then using a spoon, turn the meatballs over and simmer for a further 10 minutes (lid on).
Meanwhile cook your spaghetti. Serve on warm plates with a sprinkle of parmesan.
*CFC condemned food counter