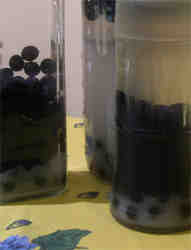 Sloe vodka on day one

We traditionally always make sloe gin. Lots of it. This year I has so many sloes that I decided to give sloe vodka a whirl. A litre of vodka made two 750ml bottles of grog. One for the cellar and one for testing and tasting.

I need to clear a space on the shelves in the barn to put our sloe gin and vodka out of reach. When I do this, it matures quietly, without being disturbed. I haven’t had time to do his so our kitchen side looks like a sloe liqueur drinker’s paradise. It has also had an impact on using the toaster which sits behind the bottles and jars. A careful, crane like movement is needed to operate the toaster.

Late one night, I spotted the sloe vodka on the kitchen side and thought that I’d have a teeny taste. It was wonderful. Clean, crisp, punchy and absolutely delicious. It was barely three weeks old. Made with the sloes that I picked from John’s garden on October 27th.

I had another toot the next night and then waved the bottle in front of Danny’s nose. Then other visitors were introduced to this ambrosia. Reviews were good and glasses refilled.

I am ashamed to announce that our tasting bottle is almost finished but delighted that I tried sloe vodka this year. I hate to admit it but I think that sloe vodka is better than sloe gin.

I had a 800g of sloes in the freezer so Jalopy and I rumbled over to Tesco on Saturday and bought an extra large bottle of medium priced vodka. Made 2 x 75ml bottles as per the above recipe and was left with 570ml of vodka. I added the remaining sloes (336g) and topped up with just over a kilo of sugar. This will produce the really ‘thick’ sloe liqueur that loads of our friends adore. This is the bottle in the photo with the white label. The label is actually the sugar -scary stuff! If we have a super party and a tasting, the sugar lovers will not be left out for years, as they have been in the past. We like the sharp taste of our grog. This bottle will be for sweet toothed visitors only.

If you still have access to sloes try our recipe. You won’t regret it.

I will report back on how the thick sugar solution sloe vodka develops in a few months time!