Tasty cheap budget meals and cooking plus an update from Fiona 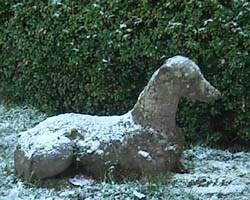 It’s Danny here because Fiona has crashed early following a busy day of cooking for her gate side stand. She is a real trier with a strong enterprising streak, thank goodness.

The gate side stand has been very enjoyable and she loves running it. It will never be a substitute for her previous work as a painter & decorator, but it is just one of many small streams of income that she is building up. Some days are good, some average, and there have been three days when it took nothing at all (two of those were Christmas Day and Boxing Day).

Today she made three new types of candy confections. One made it onto the stand in time (and sold!) and the other two will make an appearance tomorrow.

It’s -5 C here in East Anglia tonight and probably colder in many areas of the UK. I know that N. American and N. European visitors will scoff at a paltry -5 so I will admit that us inhabitants of this island are softies, really. And so are our local authorities – I heard on the radio this evening that many have already run out of salt and grit for spreading on our roads (nobody here owns snow chains and our local authorities have maybe 10 snow ploughs (or plows) between them).

Some things will never change.

So, I thought I would fill in for her regular daily spot on her blog this evening. Given the time of year, many of us are tightening our belts and trying to reduce household costs. There is a great discussion about this in our forum – read it here (thanks, S.O.L.).

I had a think about which of the really low-cost dishes that she has produced over the past three years would stand up at a supper party with friends, and therefore probably for your family too. I picked these. They are in no particular order, but they are well worth trying for fairly cheap and very tasty meals. A major aspect of our cost-cutting strategy is to buy discounted deals in supermarkets when they appear and then freeze them for future consumption (for fun, we call the cut price sections the Condemned Food Counter or CFC)