The Andrew James Halogen oven has been updated and improved: a review 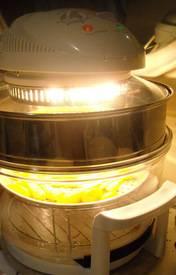 We bought our Andrew James halogen oven  in February 2010. Halogen oven are plug in devices that use a fraction of the electricity consumed by a large fan oven. That was the reason why we invested in one. If you can fill your conventional oven every time that you use it , fair enough. But what if you just want to bake a pie, bake some spuds or rustle up some oven chips?

If you buy something that is a relatively new invention/model there are bound to be a few teething problems. Product testing probably extends to just a few months. It’s only when multiple purchaser’s feet stamp with rage that tweaks and essential design faults are addressed. Which manufacturer wants/can afford to send out streams of replacement units after all?

We bought a new model Zannussi cooker years ago and the plate behind the knobs was see through. It looked cool but within a few weeks all the little bits and bobs that accumulate around the knobs had burrowed themselves behind this. How? It looked atrocious. But good old Zanussi replaced the cooker when we mentioned the problem. The housing behind the knobs on the replacement cooker had been upgraded to stainless steel.

The one problem with the older halogen ovens is that, with a lot of use, the bulb which is the heating element can blow. Or first bulb blew when the oven was still covered by the year’s warranty so the lid was replaced by the manufacturer. Recently the bulb on this one blew after 12 months.

It’s maddening. You just turn it on and it’s dead. The fan works which is even more annoying. When the bulb dies there’s not even a satisfactory explosion or even a tiny fut. No racing up to The Rat Room to declare.
“The halogen oven blew up and gave me such a fright that I can’t possibly cook supper now. Look my hands are shaking – I can’t even dial for a takeaway..”
Rather.
“Andrew is dead. Would beans on toast be OK?”

Andrew, our halogen oven has cut our electricity use dramatically. He has saved us much, much more than the cost of the oven. Probably about 25% of our entire electricity bill – our large fan oven is greedy. So we looked on Amazon for a lid replacement. The new lids have been upgraded so that the bulb can be replaced easily.

The new ovens also come with a spare bulb, loads of essential extras and a good cookbook by Norma Miller (the ‘recipe’ book that came with our first halogen oven was unusual and difficult to understand – perhaps Andrew wrote it himself and it was translated from Halogenese?). The price of a new lid was £34.99. A new bulb £9.99. A complete oven with all the extras was £39.99 and the warranty has been extended to 2 years. By the way the extender ring is essential if you want to roast a reasonable sized chicken plus veg plus it can make browning more even on other dishes.

So I ordered the complete set – it was a no brainer.

If you are looking for a general all purpose guide to halogen oven cooking and a good selection of recipes, I highly recommend The Halogen Oven Cookbook

by Norma Miller. I learnt quite a lot from the tips and tricks alone and the recipes are tried and tested  – proper cooking from scratch.

So if you’ve dithered about a halogen oven this may be the right time to invest in one. If you don’t go for the Andrew James 12 LTR Premium Halogen Oven

, double check that you can replace the bulb on other models and of course check the dreaded warranty period. You need at least two years to give value for money and avoid hassle.