The conundrum of thieves in the soft fruit cage 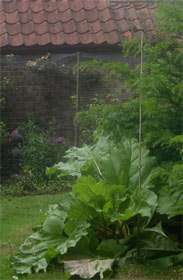 Earlier this year I built a fruit cage for our raspberry canes. I have since discovered that the metal rods from the giant’s staircase are a bit bendy on a windy day. But this has given me a lot of experience with knots and stabilisers. It’s like being on board ship after a storm. Hauling and heaving and trying to predict how to survive the next choppy sea.

I have another soft fruit border and used to wonder why we have such a poor harvest. Anne Mary gave us superb red currant tarts with melt in the mouth sweet pastry, made from the bounty of her bushes. I didn’t know that unripe berries attract birds, just thought that our bushes were a bit inferior.

Last year I talked to an old boy in the village.
“Once the flowers drop, you need to net your bushes well.”

I flapped about with unsecured nets but these were gossamer thin and tossed aside by birds and wind. This year I bought some sturdy wooden poles and strong netting. I was so early that the poles were being sold at last year’s prices. The border is a good twenty five feet long and an unusual shape as it incorporates the newt pond. But it has the advantage of being south facing and butts onto the chicken run and our neighbours’ warm red brick wash house walls.

It took quite a while to construct a run that would not be bobbing about when the weather got rough. I used the wall to secure the netting at the back and the end of the chicken run meant that I only needed to net the roof and two sides.

Finally it was finished, weeded and secure. For several days I stalked past with pride. Then one morning I was gazing like Silas Marner on my potential harvest and I noticed that there were less berries than I remembered from the day before. Was I going crazy? I checked that all the netting was totally secure.

Then I saw the tell tale skeletons of stalks stripped bare. Just a few.
“Something is eating the soft fruit in the Newt Pond Border.”
Danny looked up from his toast.
“Are you sure that the nets are anchored well?” The floppy raspberry cage has brought out the nautical in us all.
I’d checked them with a magnifying glass that morning.
“What’s eating them? Slugs? Mice?”
“Could it be Fairies?”

The conundrum has continued for several weeks. Having spent so much time constructing this cage I could hardly bear to look at the slight but constant decimation of our harvest. This morning I was pottering in the chicken run and a robin swept down to take some of the seed I’d scattered for the chickens. He then flew through the chicken run netting into the fruit cage. For a few seconds he panicked as he brushed against the fine nets and then he turned and slipped back into the chicken run. After a brief snack he was away.

There might be netting at the end of the chicken run but a three centimetre gauge allows smaller birds easy access to the first class fruit lounge.

I spend my lunch hour securing the end of the chicken run with the sturdy plastic nets that we use on the lawn when it gets muddy in the winter. If anything can get through, it almost deserves to feast on the fruit.