Navigation Menu
Home » Min Pin dogs » The cupboard was bare – so what was The Contessa going to eat last night?

The cupboard was bare – so what was The Contessa going to eat last night? 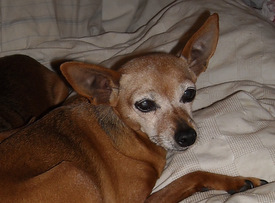 The Contessa - a champagne and lobster loving girl

Yesterday I motored down to Newmarket to fetch our medications, visit Waitrose and pick up The Contessa’s trays of diabetic prescription diet from the vet. This food is salmon and rice based as she is extremely allergic to any sort of chicken from breast fillets to derivatives. I suspect the latter are ground up beaks, claws and such like.

Somewhere between Waitrose car park and the traffic lights, where I should have turned left for the vet’s surgery, I forgot my final port of call. Perhaps it was the open bag of Hula Hoops on my lap (no breakfast/lunch) or the dulcet tones of Radio4’s PM that distracted me. Anyway when supper time came I realised my mistake. It was too late to return to town.

You can’t really mess with a diabetic dog’s diet. If she eats fish and rice you cannot suddenly give her eggs and bacon or ordinary dog food as she would be likely to keel over. Her insulin dose is matched to her food intake and the type of diet that she eats. Our vet had been firm.
“She has to be given the same food every single day. Without exception.”

In past emergencies, she has eaten fresh or tinned fish with rice without suffering any ill effects. So as I put some rice on to boil, Danny had a poke about in the larder for a tin of tuna. After a long pause he appeared with a small box in his hand.
“There’s no tinned fish. All I could find is this.”
He waived the tin under my nose. With a Marie Antoinetteish tone he declared, “Let them eat lobster.”

Tinned lobster must have been a ‘Danny buy’ as I had no idea that such a wonder existed. When I peeled back the lid I had a teeny taste. To be quite honest it was like a very superior fish paste – something that I haven’t been pressed to eat since I was a child.

Clearly The Contessa would not have turned up her nose at those loathsome childhood fish paste sandwiches. She guzzled her supper with relish and, rather than lounging in bed until she was called for breakfast the next morning, she was down at the dot of nine. Not a chance of returning to bed with a cup of tea before I’d fed her.

Somehow I always suspected that The Contessa was a champagne and lobster sort of girl.