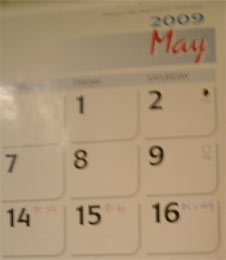 A couple of days ago I noticed that Danny was entering some sort of system on our calendar. The letters pc followed by a number. He’d started this on May 13th and the numbers were gradually rising each day. Was this a good or a bad thing?

What did pc mean? I was very curious indeed.

We share this calendar but I thought I’d give D a bit of space rather than dust off the thumbscrews. Eventually he would spontaneously explain what these annotations mean.

We were engaged with the potato count in his border this evening. It’s become a ritual. We sip a pre-supper drink and examine the ridges carefully.
“I’ve got the gardening bug after all these years,” he confided. “I count the plants each morning too. Sometimes by the evening another leaf has emerged. I wonder whether you’ve noticed the calendar – I note the progress of the bed each day. The numbers relate to the evening count.”

He also added.
“I often wonder if my father did the same, back in Ireland when I was growing up.”
“I bet he did. If you’ve planted something, the draw to see how they are doing is irresistible.”

His father was a teacher who also farmed a five acre smallholding, growing the family’s veg needs (two parents and five surviving children) for the whole year plus keeping a milking cow and a steer or two for added income. Danny always says that this farming was his father’s passion. D  never really was interested when he was growing up but tending someone else’s plot is like shopping for another’s clothes. It can be very dull indeed.

Suddenly D is now growing his own spuds and is excited by the project. If all goes well we can leave them a bit longer in the ground so that they become floury – all potatoes are floury in Ireland and he has a yearning for these.

Fingers crossed that his babies blossom and don’t get blight.