The naming of things. Asparagus, Ham and Rice Bake Recipe 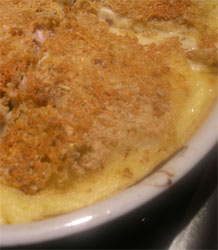 When I was a wooden toymaker I made a small car, simply shaped, immensely tactile. My sister christened it the Dumpy Car. I knew in an instant that the name would sell the car. I’d listen to people chatting about the toys on the stand. If I heard them mention the Dumpy Car, I knew that they were likely to buy. The words sound comfortable and solid, good in the mouth, with just enough resonance. I sold thousands of them.

Danny has a problem with the name “bake”.
“Never make us a bake. I’d have to leave. Just couldn’t eat it.”

He has chomped through several bakes. Renamed of course.

And naming is part of the fun of cooking. Who’d scan a menu and choose Eggs Preserved in Isinglass? I might be tempted by “Deluxe Preserved Eggs”, the imagination would flare. What was the process? Were they laid in the fat of Gloucester Old Spots and salted and sealed in large glass jars like duck confit? Or perhaps were they washed in the whey of milk from rare ewes, occasionally found grazing on the richer grasses of The Lake District.

I hate preserved eggs but I’d probably try them if they were presented as a delicacy.

So Danny savoured my Asparagus and Ham Mornay on a bed of mixed rice and asked for more.

I usually make a double batch of rice, so that there is enough left over for another meal. If you don’t have the mixed rice knocking about in the fridge or freezer, allow half an hour extra to cook this. We make béchamel sauce in large batches and it can be a godsend for meals like this. Unfreeze in the morning and never mention “bake”.

Asparagus and Ham Mornay on a bed of mixed rice recipe