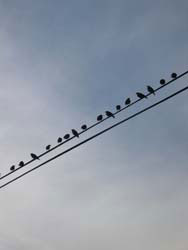 Many years ago, whilst on honeymoon in Bali, my ex husband and I met a runaway. I often think of him.

He was in his forties. His plan was to rent a boat, sail to the cluster of uninhabited islands off the coast of Bali and just disappear. We treated him to supper and now I wished I’d asked him more questions. Why was he running away? This was no Ray Mears. He could have been the man next door. The sort of man that you expect to routinely pick up a pint of milk on his way home. Neatly dressed in a parka and lace up shoes, he was clean shaven with short hair and carried a small rucksack. This was clearly a final desperate move.

He probably doesn’t know that it’s Christmas. Finding water, food and sticks for the fire would be a priority and take up most of his day. If he’s still alive.

I ralso emember a tramp that used to call regularly at my friend’s house in Cambridge for a cup of tea. We were about six at the time and spent a lot of time playing on these steps. He would hand over his small delicate cup to my friend’s mother. After a long pause, the front door would swing open and it would be handed back filled with tea. He’d settle on the steps and we’d question him about his life.

He was a well spoken tramp, a happy man with long grey hair and a beard. He wore a shapeless overcoat even though it was summer and carried a small rucksack.
I can still remember his responses. 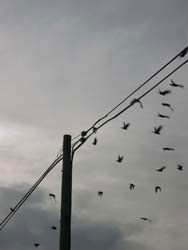 “Don’t you want to live in a proper house?”
“No, I prefer to sleep under the stars.”
“How do you live without money?”
“I always have enough.”
“Are you happy?”
“Yes.”
“Why?”
“I’m free.”
In those days I just didn’t get it. Freedom was eating ice cream for every meal and not going to bed at all.

One day the little cup slipped from his hands and broke on the steps. He was upset, explaining that it was light and portable and an old friend. He examined the broken pieces.
“You can get a mug for sixpence at Woolworths.”
He shook his head. Not interested. A mug would be too heavy to lug around.

He never came back.