Update on the dog poo/poop wormery 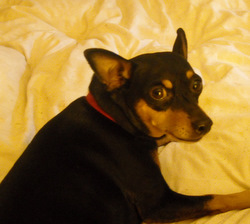 We’ve had our dog poo wormery for a month now. Finally the worms have got up to speed and are digesting all three Min Pin’s daily poo. The trick is to build up slowly – initially just adding small amounts as needed and disposing of the rest of the poo in the usual way. Despite being small dogs our three Min Pins produce a surprisingly large amount of poo – probably the equivalent to one large dog or two medium sized dogs.

I was lucky that I discovered a wormery that came with 1500 worms (most are supplied with just 500) so we didn’t have to wait for worm numbers to increase to be able to cope with the deluge.

A dog poo wormery produces liquid feed and rich compost. But this can only be used on the herbaceous part of the garden and in no circumstances on vegetables and fruit. That’s fine for us as the flowers that we are growing are as important as the edibles in the kitchen garden.

I can now see that the production of liquid fertiliser and compost is a long slow process in a wormery. In no way can these worms produce all the compost that we’ll need over the year. But having a dog poo womery means that we are not sending yet more to landfill and there is a nice green, recycling edge to the project.

Incidentally the wormery is not smelly at all. The trick is to push the poo into the bedding using a trowel – we have an old one specially dedicated to the system. The wormery also stands in the shadiest part of the garden so the worms do not overheat.

Although initially I found the sight of worms on masses a bit disgusting but I’m now fascinated by them. The construction of the wormery is pretty simple so I’m thinking of making another to use for kitchen scraps (the liquid fertiliser and compost from this type of wormery can be used on the vegetable patch).
The biggest outlay would be the worms – but I have bought a sack of farmyard manure, slit the base and stationed it near the compost heaps hoping to attract composting worms for free. We also have loads of composting worms that have been attracted to our kitchen scraps compost bin so perhaps putting a string bag of manure into the bin might be the quickest route to collecting the right sort of worm.

So having tried and tested the dog poo wormery, it gets the thumbs up. Definitely worth considering if you own a dog and are grappling with poop a scoop bags on walks and at home.