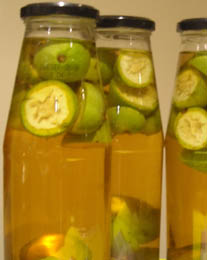 Last year I was a bit late picking walnuts for The Grand Pickled Walnut Challenge. Not wanting to waste the nuts that were clearly far too hard to pickle, I flexed my muscles and cut a few in half. I added these to some white wine vinegar, popped the experiment onto a shelf in the barn and forgot all about it.

About a month ago I was searching the shelves for empty vodka and gin bottles to make raspberry liqueur. My hand slipped and the bottle of walnut vinegar smashed on the ground. I managed to wipe a drop onto my forefinger as the vinegar soaked away. It was delicious. The walnuts had softened the edge of the vinegar. This would have been perfect for a salad without oil.

I’d planned to remove the walnuts after six months but they had been infusing the vinegar for nearly a year.

Last Saturday I went walnut picking on this beautiful estate. I had planned to go back at the end of June but when I arrived two weeks later, my friend’s face flickered.
“You might be too late.”

We tested the walnuts. A darning needle speared into the pointed end furthest from the branch indicated that I was probably just in time. So we picked, gossiped, laughed and filled a chubby carrier bag.

This afternoon I woke from a deep sleep and remembered that the green walnuts had been hanging in the kitchen for a week.
“I wonder if they know that they have been harvested and are waiting in suspended animation? Or have they been maturing for the week?”

After supper I crept downstairs and tested them. 22 were pretty hard the rest went into a saline solution. I halved the hard nuts. I divided them between three 750g, warm, sterilised passata bottles. I topped these up with 1500 ml of good white wine vinegar. I’ll test after six months but the sultry flavour of the vinegar matured for a year still lingers.

If you’re too late for pickled walnuts this year you might like to try making walnut vinegar. It’s easy, delicious and just takes minutes to make.