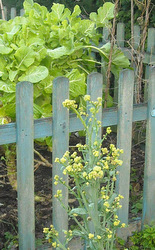 "cauliflower tree" with cabbage trees in the background

I’ve just written this post:
“When cauliflowers start to go to seed all is not lost”

There is nothing better than a home grown cauliflower. The flavour is sweeter and curds snap away from the main stem with a satisfying crunch. If you grow your own the entire plant can be used too – the large outer leaves and stem make a very good soup.

Growing decent sized caulis can be a bit of a challenge as the have one major need – water. Lots of it. A good mulch around the plants can help but if you have a light soil they need to be watered almost every day in the summer.

Last summer our brassicas were planted in our driest border in the kitchen garden. From the time that we found our allotment in July they got very little attention. They produced miniscule heads that were not worth harvesting.

Left to their own devices in the border the heads began to grow and by November they had produced little cauliflower trees with tasty shoots. Similar in flavour to sprouting broccoli, but the harvest was much bigger than a baby head the size of a golf ball.

So if your cauliflower heads are small in 2012, why not give this a go and leave them to produce their green stemmed florets. They are a real treat during the dark winter months. 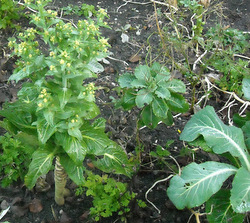 Just as I was sorting through the photos of my ‘cauliflower trees’ I spotted that the leaves looked distinctly different from the cauliflower plant on the right of this photo. Danny came over and peered at the screen.
“Well, I suspected they were rather weedy white sprouting broccoli plants.” He snapped off a shoot. “They taste just the same.”

The labels which marked the rows have disappeared long ago and a planting plan would have come in very handy.

Meanwhile I’ll dream about my cauliflower trees. Maybe if I cross pollinated white sprouting broccoli with cauliflower I could produce one some day. But after this wonder blunder you’d never believe me!