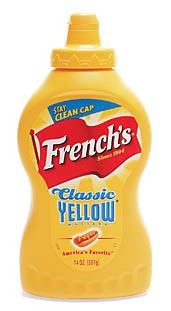 I’m a big mustard fan. I always make fresh English mustard (Colman’s) from powder when we are having steak. I also have a passion for French’s mustard – with sausages ideally. I like the little sombrero hat that acts as a lid and the funny windy, squishy sound when you squeeze the pack.

In fact one day when we were preparing lunch one day – soup and sandwiches – I thought Danny’s table matters had really gone downhill. When I heard that sound I thought that he was sampling the soup rather than adding some zing to the sandwiches!

Today Steve Ott the editor of Kitchen Garden magazine came to visit. Lunch was supposed to be an easy meal – just cold chicken, ham, warm potato salad and coleslaw. We’d roasted the chicken the night before and when I started to carve it I discovered that it was still pink so we could only eat a little of the breast. Luckily I still had some bacon and egg pie. Then the potatoes cooked unevenly and had to be reboiled. Finally, reaching for the mayonnaise to make the coleslaw dressing I realised that the jar was nearly empty.

So I busked with ingredients that I found in the fridge and made this one. It was a big hit with Danny who declared afterwards.
“Delicious and much, much better than your usual coleslaw dressing!”

And the secret ingredient is French’s mustard that just happened to be sitting on the side twinkling at me.

Ingredients:
3 heaped tablespoons of Greek yoghurt
1 tablespoon of mayonnaise
1 teaspoon of French’s mustard
A good dash of ground white pepper
Half a teaspoon of orange vinegar or white wine vinegar

Method:
Mix all the ingredients together in a large bowl and add the sliced vegetables – I used a Spring cabbage from the garden, an onion and a large carrot. Mix well and serve.