Posted by Fiona Nevile in Duck Goose and Turkey | 8 comments 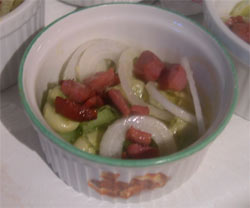 If anyone had suggested ten years ago that I might like to try growing broad beans, I would have thought that they were deranged.

I hated broad beans. The flouriness of the beans and their crinkly skins.

When John arrived with a large smile and a box of seeds it would have been rude to say no. So I smiled and enthused as he planted an entire bed of the kitchen garden with the plump seeds of these loathsome plants.

I cared for these plants. Nipping of the tops to avoid the invasion of blackfly. Watering them when it was dry. They were planted in November and within six months chubby pods were appearing. John snapped off a plump pod and split it open to reveal the row of beans snug in their six ply lining.
“I think that you can start harvesting.”
“Great.”

He clearly had twigged that I wasn’t overly keen as he left a large handful of pods in my uncle’s old trilby on the back step before he left. This trilby is worn by John when it rains and doubles as a small trug on days when the weather is fine.

When Danny spotted them he just had to cook them and suddenly 72 feet of broad bean plants seemed too few.

Picked young and cooked within a day, broad beans are a delicacy. Take a chance and grow them next year if you haven’t discovered this secret.

This rich salad is exquisite and is best served on its own as a starter, with fresh crusty bread to mop up every drop of the juices.

Ingredients:
For the salad: