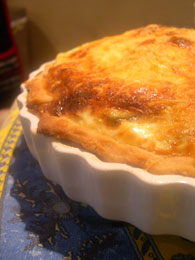 “I do hope this quiche is tasty,” I carelesly remarked as we sat down for lunch.
Danny was just about to sample my concoction and paused fork in air.
“You said it was a tart.”
“Well, yes. It is a tart.” I had slipped up. Danny won’t eat quiche, but he’ll wolf down tart.
“Isn’t a quiche supposed to be bland?”
“Of course not. People wouldn’t eat them if they were bland.”
“Well most men don’t eat them. This is definitely a tart.” He cut himself another slice.