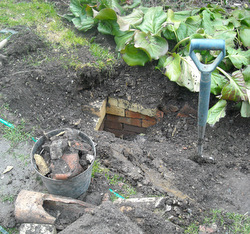 Today I decided to do my digging in the morning.

There seemed to be many more bricks this time. Three barrow loads to a square meter. I was day dreaming about digging up buried treasure. Then I dug up some hefty, rotten logs. These uncovered a paving slab. Suddenly things were looking interesting. Why would someone bury a paving slab under a lawn?

I prised up the slab with my fork to reveal a brick wall buried under the earth. There was no mortar between the bricks and an old drain pipe was set into the bottom of the wall.

Feeling like a latter day Howard Carter, I rushed up to the Rat Room to announce my discovery. Danny padded down in his slippers to examine the wall.

Ages ago when a young lad visited me claiming that the cottage belonged to him,  he mentioned that there had been a cellar.
“It constantly flooded. So in the end they blocked it up.”
We believed he was right. Certainly this winter the kitchen was unbelievably cold. We imagined a large block of frozen water under the kitchen floor. Most of the houses around here have a cellar. They have a tendency to flood and this can be resolved by putting a sump pump in the floor – these pumps are not very expensive and do the job well.

When I asked the lad where the entrance to the cellar was he waved his hand vaguely into the garden. There’s a small concrete area next to the barn where I assumed the entrance had been.

Was I looking at a wall of the cellar this morning? During my afternoon rest I considered filling in the hole with the ballast that I had dug up and growing short rooted plants in the area. But this evening I resolved to investigate further. I’ve never been very happy about living over a flooded cellar.

A dry cellar could be very useful for storing root vegetables in the winter. Or would I be opening up a can of worms?