Posted by Fiona Nevile in Reviews, Save Money, Vegetables | 17 comments 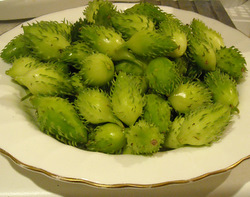 I tried growing peppers yet again this year in the greenhouse. Some were attacked by a mystery pest that ate into the fruit just at stem level. The fruit gradually rotted. But one plant was not attacked and we ended the season with sweet peppers – just four but these are the first peppers that I’ve ever managed to grow.

I also planted achocha this year. I hadn’t heard of these until I spotted them on The Real Seed website. Who could resist the name “Fat Baby” and the photo of just a hand poking out from the undergrowth of achocha. Scroll down the page to see what I mean.

Achocha originated in South America and romp away producing lots and lots of these small, spiked green fruit. Raw, they taste like a cucumber crossed with sweet green pepper. Cooked they taste just like green peppers. The spines indicate a touch of hedgehog in their ancestry – only joking – but are soft and strangely palatable.

Mine didn’t flourish like the ones in the photo but were bunged into a very large pot in a sunny SW spot in front of the cottage. They were watered haphazardly and fed just once over the summer but the four plants have produced hundreds of these cute green hedgehog shaped fruits for the past three months. They measure between 1.5 inches/4 cm to 2 inches/5 cm.

Next year I will be growing more achocha in a border trained along a fence or trellis as they have proved to be so much more productive than my sweet pepper plants.  With a bit of luck and TLC we will be able to be self sufficient in sweet green pepper flavoured fruit. This lot are going in the dehydrator (sliced) for winter casseroles and risottos.

If you have problems growing sweet peppers to keep you going throughout the year (with freezing and dehydrating at the end of the summer) these could be the answer for you too.